Do-or-die encounter for RR against MI; KXIP start as favourites vs DC 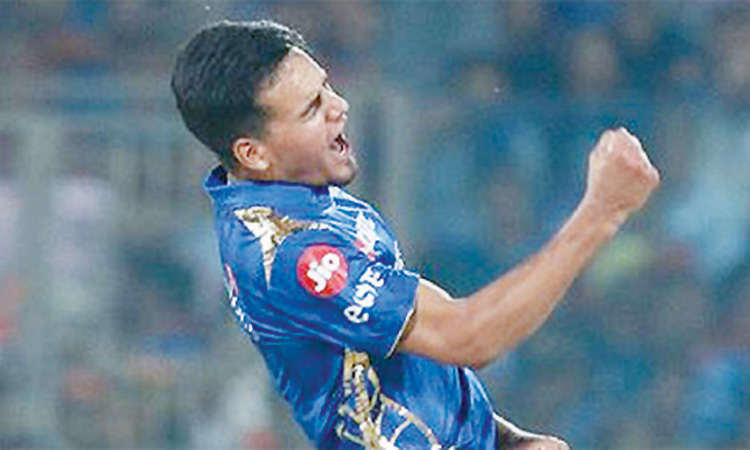 Mumbai Indians’ Rahul Chahar reacts after taking the wicket of Shreyas Iyer of Delhi Capitals during their IPL match on Thursday. Agence France-Presse

Rajasthan Royals will know anything short of a victory will virtually end their chances of making the play-offs, when they take on high-flying Mumbai Indians at the Sawai Mansingh Stadium on Saturday.

Royals are currently seventh in the points table, having picked four points from eight matches. In their last encounter, the Ajinkya Rahane-led side lost to Kings XI Punjab by 12 runs, a match they threw away chasing 183 for victory after being in the chase till the halfway mark. Royals’ batting collapses have cost them as the team is too dependent on Jos Buttler to score runs quickly.

The likes of Rahane and Steve Smith haven’t really got going and Sanju Samson’s form too, has dipped after the hundred he scored against Sunrisers Hyderabad last month.

Smith did not play the last game and is expected to be back for this one with Ashton Turner, who made his debut against Punjab, failing to make any impact. Fast rising England quick Jofra Archer is Royals’s key bowler and he will have to fire once again to guide his team to a victory over Mumbai who have a lot of firepower in their batting.

The three-time IPL winners made short work of Delhi Capitals on Thursday, winning by 40 runs.

While none of their batsmen got a fifty, leggie Rahul Chahar snared three wickets with Jasprit Bumrah bowling four magnificent overs and Hardik Pandya also doing well with the ball.

The odds are heavily stacked in favour of Mumbai but Royals can draw heart from their first meeting where they won by four wickets in a last over-finish.

The wicket at the Ferozeshah Kotla once again came back to haunt Delhi Capitals and stop their three-match winning momentum on Thursday. And Kings XI Punjab will look to feed off that very advantage when they come to the Kotla on Saturday with some quality spinners in a side led by none other than R Ashwin.  With the likes of Mujeeb ur Rahman and Murugan Ashwin in the side to back skipper Ashwin, KXIP will be relishing the opportunity of playing on a low and slow Kotla wicket. Not to forget the experience of Mohammed Shami in the pace bowling department and the exuberance of Arshdeep Singh.

For Delhi, it will be about replicating their away form on home conditions as the free flowing stroke-makers in Prithvi Shaw, Shikhar Dhawan, skipper Shreyas Iyer and Rishabh Pant have found it very difficult to adapt to the slow nature of the Kotla wicket. In fact, the team selection has also left a lot to be desired as they played Keemo Paul over Sandeep Lamichhane on a turning wicket. Interestingly, even Mumbai Indians on Wednesday night decided to play three spinners in Rahul Chahar, Jayant Yadav and Krunal Pandya while Delhi went in with just two in Amit Mishra and Axar Patel.

Team combination apart, the Delhi batsmen must find a way to compete on their home turf if DC are to win matches and make it to the play-offs. They cannot keep using the excuse of the ball not coming onto the bat when they clearly understand that this Kotla wicket will remain like this through the tournament and it isn’t a case of one off games.

The bowlers have done a far better job and apart from the death overs on Thursday, it almost looked like the DC bowlers would restrict MI to a score around the 145-150 mark. They have also been very consistent and their first wide came in the 19th over. But the batsmen must stand up and make it count as T20 cricket after all is about scoring runs and then defending them.