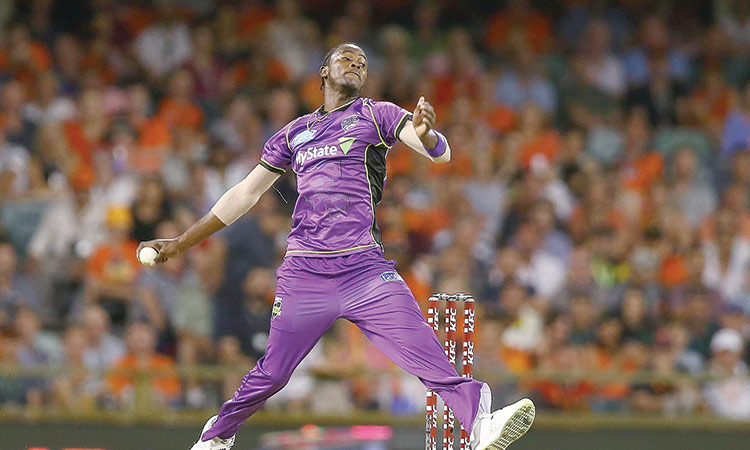 A 90 mph bowler, excellent fielder and aggressive batsman, Jofra Archer has been impressing in the ongoing Indian Premier League.

The uncapped dynamic all-rounder was included Wednesday in a 17-man squad for next month’s one-day internationals against Pakistan and Ireland.

The Barbados-born rising star, was, however, left out of the 15-man preliminary World Cup squad.

The Sussex paceman could still have as many as six one-day internationals -- one against Ireland and five against Pakistan as well as a Twenty20 against Pakistan -- to force his way in before the final World Cup squad deadline of May 23.

“I don’t want to step on anyone’s toes, the squad selected for the World Cup deserve it and my job is to do my very best against Pakistan,” said 24-year-old Archer who has an English father and holds a British passport.

He completed a three-year qualification period on March 17 after the England and Wales Cricket Board changed its residency rules.

Under the previous system, he would not have been eligible until 2022 after a seven-year residency.

The prospect of Archer playing at the World Cup has caused concern among several more established England rivals for a pace-bowling berth including Chris Woakes, David Willey and Mark Wood, amid suggestions his inclusion could damage team morale.

“Of course I want to play in the World Cup, but if it doesn’t happen for me I’m not going to get upset,” Archer added.

“I’m going to give it my best shot. I’ve worked pretty much all my life for this moment and I just want to tackle it and put my best foot forward.”

He added: “I was fully prepared in my mind that it was going to be a seven-year job. When I found out I was qualified more quickly it was obviously a bit of a shock but also exciting.”

“It feels really overwhelming. I didn’t expect to ever be good enough to play for England until the last couple of years after I started doing well in T20 tournaments and it’s been a whirlwind period for me.”

Warwickshire all-rounder Woakes, asked about the possibility of Archer playing at the World Cup, said on Tuesday: “It probably wouldn’t be fair, morally, but at the same time it’s the nature of international sport.”

Archer and another Barbados-born Sussex player, Chris Jordan, were both added to the 15-man squad that played a one-day series in the West Indies earlier this year.

A 90 mph bowler, excellent fielder and aggressive batsman, Archer has been impressing in the Indian Premier League, taking three for 15 for the Rajasthan Royals -- where his team-mates include England’s Jos Buttler and Ben Stokes -- against Kings XI Punjab on Tuesday.

Stokes recently described Archer as one of the most “naturally gifted” bowlers he had seen.