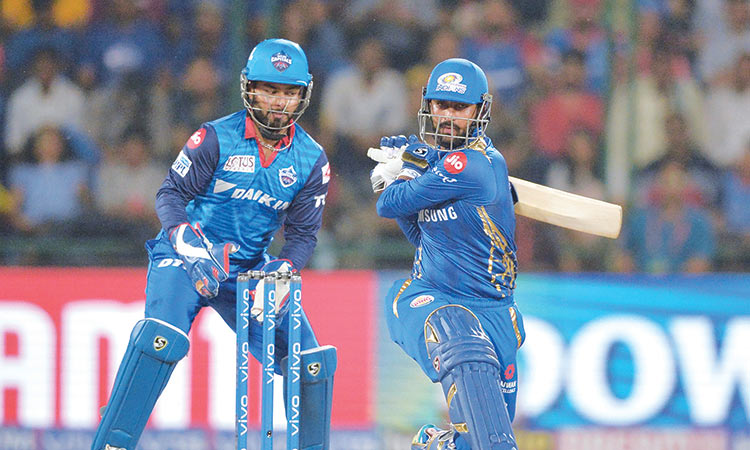 Rishabh Pant had started Delhi Capitals’ journey in the 12th edition of the Indian Premier League by smashing Mumbai Indians pacer Jasprit Bumrah all over the park in their opening encounter in Mumbai. But Bumrah got his revenge at the Ferozeshah Kotla on Thursday as he sent Pant’s off-stump for a walk in the park. With that ended DC’s hope as they finished on 128/9, losing the game by 40 runs.

Chasing 169, DC made a mess of the target after Shikhar Dhawan was dismissed for 35 in the 7th over of the innings by Rahul Chahar. After a quality start of 48/0 in the first six overs, Dhawan’s wicket opened the floodgates as Chahar kept picking wickets and finished with figures of 3/19 from his four overs.

While Chahar sent back Dhawan, Prithvi Shaw (20) and skipper Shreyas Iyer (3), Krunal Pandya sent back the dangerous Colin Munro (3) as Delhi were never really in the chase on a low and slow Kotla wicket.

Earlier, Hardik Pandya (32 off 15 balls) and Krunal (37*) provided the late order flourish as Mumbai Indians scored 168/5 in their 20 overs. Having bowled a disciplined line and length through the innings, the DC bowlers lost the plot in the last five overs as the MI batsmen picked 64 runs.

While Krunal was the anchor during the 54-run partnership, Hardik once again showed why he is such a dangerous batsman in the death overs as he used the long handle to excellent effect to dig out the low full tosses and attempted yorkers and sent them over the ropes till Kagiso Rabada dismissed him off the third ball of the 20th over.

Having won the toss and decided to bat first, Mumbai Indians got off to a good start with both skipper Rohit Sharma and opening partner Quinton de Kock looking to make the most of the powerplay. They mixed caution with aggression as they put on 57 runs without losing a wicket after the first six overs.

But just when it looked like the openers would take the game away, Amit Mishra struck. Brought in to slow the flow of runs on a slowish Kotla wicket, he got one to grip a bit and turn to miss the defence of Rohit (30 off 22 balls) and shake the timber. The Delhi boys celebrated as the score read 57/1.

Ben Cutting (2) failed to make much of the opportunity he got as Axar Patel caught him plumb in front with just five runs added to the scoreboard. From 57/0 after 6, the score read 62/2 in 7.5 overs and DC was right back in the game.

But de Kock and Suryakumar Yadav looked to steady the ship and get a partnership going. And just when it looked like they would settle down and set the stage for flourishing finish, de Kock (35) was run out as a misunderstanding between the two saw both batsmen stranded at the striker’s end. Axar happily removed the bails at the non-striker’s end. The score read 74/3 in 9.5 overs.

Meanwhile, April 2 will always be etched in the memory of leg-spinner Shreyas Gopal. Playing for Rajasthan Royals in the IPL, he picked three wickets against Royal Challengers Bangalore (RCB) to help his team register a 7-wicket win.

More than the win, it was the wickets that he scalped that will stay with him forever -- Virat Kohli, AB de Villiers and upcoming Windies talent Shimron Hetmyer.

“There was no plan for them (Kohli and de Villers). You can’t make any plan for such great batsmen. I just wanted to bowl a googly and keep it tight as possible,” he said. “They misread the line of the ball and I was fortunate to get their wickets.”

In the ongoing edition, the Bengaluru cricketer has consistently performed for his team and has picked eight wickets from as many games so far. But what makes his performance stand out is an economy rate of 6.60. For a spinner to bowl so well is undoubtedly a quality effort, but Gopal feels there is no secret behind it.

“There is no secret. I am just happy that my hardwork in the past one year is paying off. Despite the kind of result we are getting as a team, personally I had a decent season from the start and will just try to continue and get even better,” he opined.

Gopal started his career as a middle-order batsman and slowly turned into a genuine leg-spinner. When asked how the transformation happened, he said: “It wasn’t something planned. I didn’t bowl much when I was a kid, but in school cricket I had to bowl as sometimes we lacked a good team. So, I just continued to contribute both with the bat and ball.”