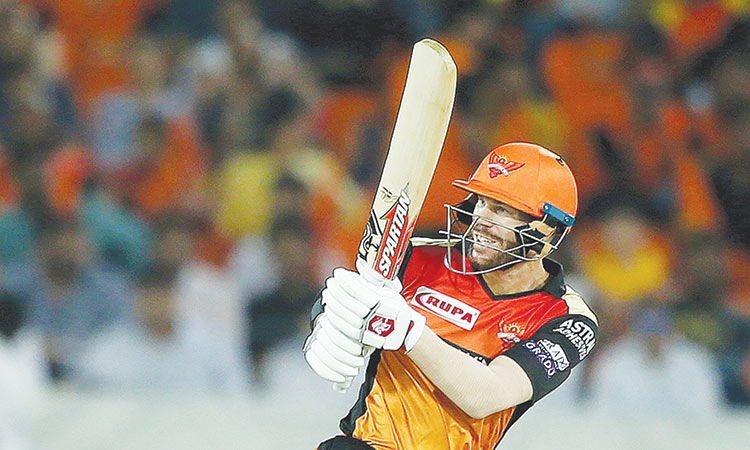 SRH’s David Warner plays a shot against CSK during their IPL match in Hyderabad on Wednesday. Associated Press

SRH reached the 133-run target with 19 balls to spare to move to the fifth spot in the points table.

Chasing the target, SRH got off to a flying start as both Warner and Bairstow continued with their rampage and collected 66 runs in 5.4 overs before the Australian got out after scoring an explosive 25-ball fifty which included 10 fours.

Skipper Kane Williamson, who came in next, couldn’t stay much at the crease and became the victim of leg-spinner Imran Tahir at his individual score of 3.

However, Bairstow stayed at the other end to continue his prolific run in the ongoing IPL and collected boundaries at will. The explosive England opener remained unbeaten at 61. The 44-ball inning was studded with three fours and three sixes.

The visitors surely missed the experience of M.S. Dhoni -- who had to sit out because of a back injury -- especially while defending the target. In Dhoni’s absence, Suresh Raina captained the side. It was for the first time since 2005 that Dhoni had missed an IPL match.

Earlier electing to bat, Chennai started off slowly with openers Shane Watson and Faf du Plessis fetching just 14 runs in the first four overs. Thereafter, they tried to up the ante and hit some lusty blows to take the team’s score to 41 at the end of powerplay.

Both Watson and du Plessis looked in great touch and added 79 runs for the first wicket before both of them got out at their individual scores of 45 and 30. Thereafter, the Chennai innings fell apart and they lost wickets in a heap only to put pressure on themselves.

Owing to the slow nature of the wicket and some brilliant bowling performance by the SRH bowlers, the visitors amassed just 30 runs in the final five overs and crawled to 132-5 in their stipulated quota of 20 overs. It was the second defeat for the CSK in nine games, while SRH now have five wins from their eight games they have played.

SRH will now take on Kolkata Knight Riders at the same venue on April 21, while CSK will travel to Bengaluru to lock horns with Royal Challengers Bangalore the same day.

But in the last two powerplay overs, both Watson and du Plessis hit some lusty shots and took the score to 41-0 at the end of six overs. Both the batsmen looked comfortable at the crease and collected boundaries at will.

But left-arm spinner Shahbaz Nadeem broke the 79-run opening partenrship as he clean bowled Watson at 31 in the ninth over of the game. Vijay Shankar, included in the World Cup squad, celebrated his selection by sending du Plessis (45) to the hut in the next over.