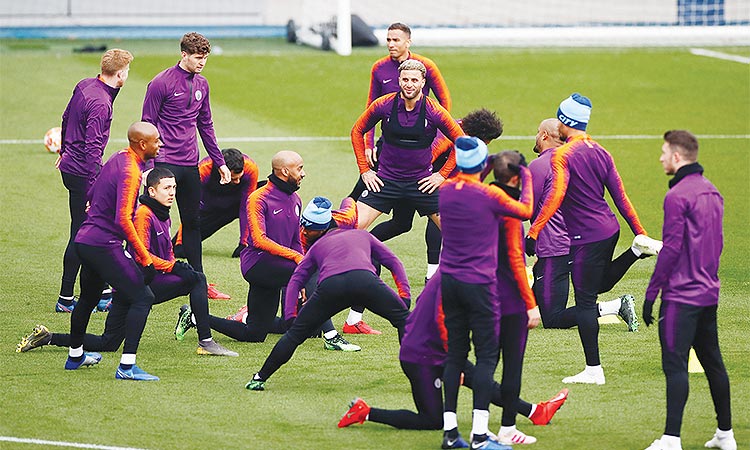 Guardiola’s side are in contention to win all four major trophies after lifting the League Cup, reaching the FA Cup final and staying in touch with Premier League leaders Liverpool.

City’s next obstacle on the road to football immortality comes in the Champions League quarter-final second leg against Tottenham as they bid to overturn a 1-0 deficit at the Etihad Stadium.

Even if they beat Tottenham to make the semi-finals, there will be no time for City to rest on their laurels as they face Spurs again in the Premier League on Saturday before heading to Manchester United the following Wednesday.

With Liverpool two points clear of City, who have a game in hand, Guardiola acknowledged the next seven days will decide whether his team take their quadruple chase into the final days of the season.

“Definitely. If we don’t win these games we will be out of two competitions. I’ve had this feeling for weeks,” Guardiola told reporters on Tuesday.

“Last season in this period we were already champions. This season we had an incredible opponent in the Premier League with Liverpool. Both teams deserve to be champions, but just one is going to get it.

“After what we did last season, I’m surprised that we have 83 points right now. The target is 98, without that we will not be champions.

“Tottenham are incredible and we don’t have rest. We played nine, 10 or 11 games more than Liverpool. Even with that, I like this challenge.”

Having won the Premier League in record-breaking fashion last season, Guardiola could have been forgiven for focusing on Europe this term as he looks to win the Champions League for the third time as a boss -- and the first since his 2011 triumph with Barcelona.

But the City boss claims the Premier League remains his primary goal.

And Guardiola, who cut a tetchy figure for much of his press conference, refused to accept he has underachieved in Europe’s elite club competition.

“The Champions League is tough. We fail all the time. Sorry guys, I’m a failure!” he said in an outburst laced with sarcasm.

“The Premier League is the most important title, to be there every three days competing.”

Meanwhile, Porto are looking for a historic comeback to overturn the 2-0 deficit against Liverpool in their second leg of Champions League quarter-finals.

Moussa Marega’s path to the top in football bears little resemblance to the career enjoyed by Thierry Henry, but the FC Porto striker does share something in common with the France legend.

“We are from the same town. We were both born in Les Ulis” in the Paris suburbs, Marega told UEFA.com.

“He was my first idol. He is also a striker, and I always dreamed of being a striker and scoring as many goals as him.” As a late arrival at the elite level, the 28-year-old Malian international centre-forward may never match Henry’s statistics.

However, his goals have played a big part in his club’s success over the last 18 months and he is set to again lead the Porto attack in Wednesday’s Champions League quarter-final, second leg against Liverpool at the Estadio do Dragao.

Last week, Marega was a menace to the Liverpool defence at Anfield but could not prevent his side slumping to a 2-0 defeat that means their hopes of progressing to a first semi-final since they won the trophy in 2004 appear slim.

Marega, though, had an excuse.

Porto have won all four home games in the Champions League this season, but memories of Liverpool’s last visit remain fresh -- the Premier League side romped to a 5-0 win in northern Portugal in the last 16 first leg a year ago.

Marega did not score then, but he was his side’s top marksman with 22 league goals as they won the Portuguese title.

- Illustrious company - This season he has 18 in all competitions, including six in eight Champions League matches, among them a precious goal in the 3-1 win at home to Roma in the last round.

Ahead of this week’s matches, only Lionel Messi and Robert Lewandowski -- each with eight -- have scored more.

It is illustrious company to be keeping for a player who did not come through the academy of any leading club. Instead, he worked his way up to the French third division, where he was playing for Amiens.