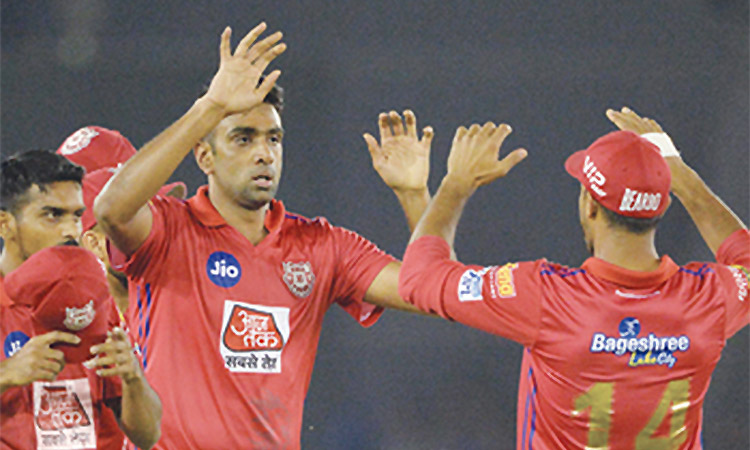 Ashwin produced a stellar performance as Kings XI Punjab defeated Rajasthan Royals by 12 runs in an IPL match on Tuesday. After posting 182/6, Punjab restricted Rajasthan to 170/7. Ashwin returned with a figure of 2-24.

Earlier, buoyed by a World Cup call-up, KL Rahul struck a well-timed fifty but Jofra Archer stole the limelight from him with splendid figures of 3/15 as Kings XI Punjab posted 182/6.

Rahul, who was included in the 15-member World Cup squad on Monday, took 47 balls to score 52 with the help of three fours and two sixes.A

David Miller (40 off 27 balls; 2x4; 2x6) also played a vital role as the pair stitched together a 85-run stand for the third wicket after visiting team skipper Ajinkya Rahane asked them to bat first.

But Archer bowled a brilliant second spell to not only snare two wickets in the same over but check the run flow, before Kings XI skipper R Ashwin played a 4-ball 17 run cameo to take the score past the 180-run mark.

Rahul, who scored his maiden hundred in the IPL recently, started very slowly and was 13 off 23 balls at the halfway stage. But then he shifted gears seamlessly before getting out to Jaydev Unadkat (1/48).

After the Powerplay overs, the home team were 39/1. Rahul and Miller then upped the ante in the 14th and 15th overs with 39 runs coming from them.

Rahul brought up his 14th fifty in the IPL in the 17th over, milking Archer for a sublime boundary between cover and mid-off but Unadkat made amends for getting spanked by the India right-hander earlier, by removing him in the 18th over, Archer taking the catch at point.

Archer then removed Nicholas Pooran (5) and Mandeep Singh (0) in the 19th over before Dhawal Kulkarni accounted for Miller, the South African trying to clear wide long on and instead giving wicketkeeper Jos Buttler an easy catch in the final over. But just when it looked like Kings XI would finish with a whimper, Ashwin led from the front by smashing a four and two back-to-back sixes off the last two balls to finish on a high.

Meanwhile, a newly formed Indian Premier League franchise — Delhi Capitals — has performed exceptionally well in the IPL and have grabbed the second spot in the points-table. The Shreyas Iyer-led side looks to seal a play-off berth and also clinch the title.

Everything is new in this Delhi side -- the management, players as well as support staff. But opener Shikhar Dhawan attributes the success to its coaches — Ricky POnting and Sourav Ganguly.

“It has been a good season for us. The franchise started with a clean slate,” Dhawan said on the sidelines of a function, organised by Fortis Healthcare and Delhi Capitals, to raise awareness about organ donation. The support of coaches Ponting and Ganguly has been very good. Their experience as captains helped the team. Also, the belief they instilled in players made the difference,” said Dhawan. He has amassed 256 runs from eight innings.

“At the same time, youngsters in the team are maturing and playing well. Even experienced players can learn a lot from youngsters, provided you have an open mind. That’s the beauty of cricket,” he said.

On April 12 at the Eden Gardens, Dhawan missed a century against Kolkata Knight Riders by just three runs as his teammate Colin Ingram hit a six to give Capitals a seven-wicket victory.

But he has no regrets. “I was not thinking of the century. It was more important to win the match. At that time it was important to hold on to my wicket. If I had fallen my team would have come under pressure. I wanted to take the team over the line because we had lost a couple of matches from a winning position,” he said.