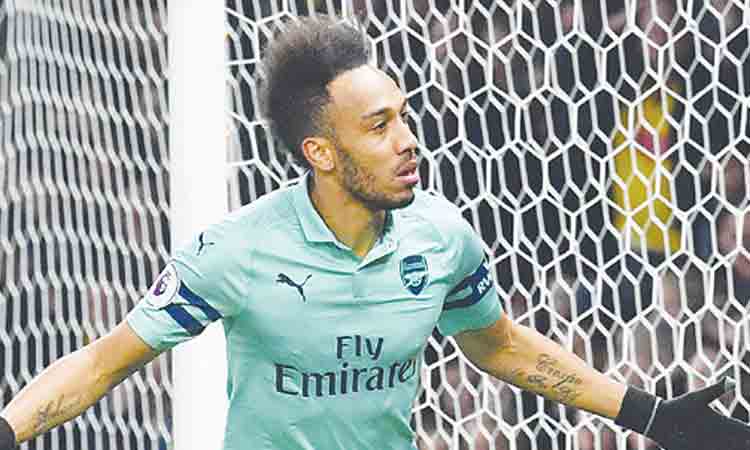 Arsenal’s Pierre-Emerick Aubameyang celebrates after scoring against Watford during their EPL match in London on Monday. Agence France-Presse

Arsenal moved into the Premier League top four, but made hard work of seeing off 10-man Watford 1-0 thanks to Pierre-Emerick Aubameyang’s fortunate early opener on Monday.

Aubameyang profited from an error by Watford goalkeeper Ben Foster as he blasted an attempted clearance in off the Gabon international.

Watford captain Troy Deeney was then shown a straight red card after just 11 minutes, but the Gunners failed to make the most of their man advantage and were fortunate as the hosts twice hit the woodwork.

However, Unai Emery’s men held out for a first clean sheet away from home in the Premier League this season to move ahead of Chelsea on goal difference into fourth.

“We didn’t control the match like I wanted,” admitted Emery.

“The team was anxious because they could (have) taken some moment. The most important for us is to score the second goal, which we didn’t do.”

Arsenal also edge to within a point of north London rivals Tottenham and two clear of Manchester United in the four-way battle for the two remaining Champions League places behind Liverpool and Manchester City.

FA Cup finalists Watford were already shorn of the man who helped book their place at Wembley against Manchester City next month as Gerard Deulofeu missed out through injury and Javi Gracia’s side did themselves little favours early on.

Firstly, Foster dallied as Aubameyang closed in to concede a comical opener.

“I’ve said sorry to the lads,” said Foster. “I have tried to drag it on to my left and pass it out but before I knew it he (Aubameyang) was bloody on me.

“In hindsight you have to get rid as quick as you can, even if it goes into row Z.

“I am definitely not a modern goalie. They can’t score from row Z.”

And within seconds, Deeney was punished for what the referee saw as an elbow into the face of Lucas Torreira.

“If it is a foul I have a doubt, maybe a yellow card but (a) red card, I don’t understand why the referee did it,” argued Watford boss Javi Gracia.

However, the 10 men were still causing problems to a defensively vulnerable Arsenal at the other end.

Craig Cathcart’s shot was turned onto the post by Bernd Leno and the German goalkeeper was also a full stretch to turn an Etienne Capoue free-kick behind.

Emery introduced Mesut Ozil at half-time in an attempt to improve Arsenal’s final ball with so much space to counter-attack into, but to little avail.

Alex Iwobi looked to have provided the perfect cross to pick out Henrikh Mkhitaryan, but Foster made amends for his earlier error by spreading himself to make a brilliant save from the Armenian.

Arsenal’s terrible away record is why they face such a tight battle to secure Champions League football next season.

And they could have thrown just a second away league win since November away as Adam Masina crashed a 25-yard strike off the crossbar before Andre Gray miscontrolled Daryl Janmaat’s pass when clean through on Leno.