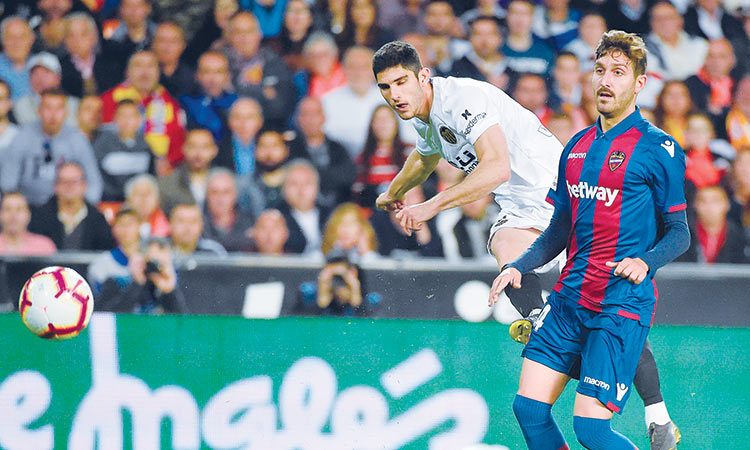 Valencia stayed in the hunt for the final Champions League qualifying spot in La Liga with a rampant 3-1 win in a city derby at home to Levante on Sunday.

Scarred by defeat by struggling Rayo Vallecano last weekend yet buoyed by victory in their Europa League quarter-final first leg over Villarreal, Marcelino’s side got off to a flying start with a headed goal from Santi Mina in the second minute.

They lost defender Cristiano Piccini to a serious injury later in the first half and Levante equalised against the run of play in the 56th minute when Valencia’s Carlos Soler clumsily diverted a corner into his own net.

Valencia’s record signing Goncalo Guedes immediately restored the home side’s lead down the other end by lashing into the far corner, while Mina scored a tap-in six minutes later to seal the three points.

Valencia are sixth in the standings after 32 games on 49 points, two behind fifth-placed Getafe who drew 2-2 at Valladolid and three back from Sevilla, who occupy fourth spot after beating Real Betis 3-2 on Saturday.

Meanwhile, Athletic Bilbao kept up their strong run of form on Sunday in the chase for the final Champions League spot in Spain.

But the hosts needed Raul Garcia to ensure the victory with a goal before Raul de Tomas scored Rayo’s second goal with five minutes to play.

Elsewhere, Jorge Molina converted a penalty on the last kick of the match to snatch the draw for Getafe at Valladolid.