Ten-man PSG humiliated at Lille, made to wait for title - GulfToday

Ten-man PSG humiliated at Lille, made to wait for title 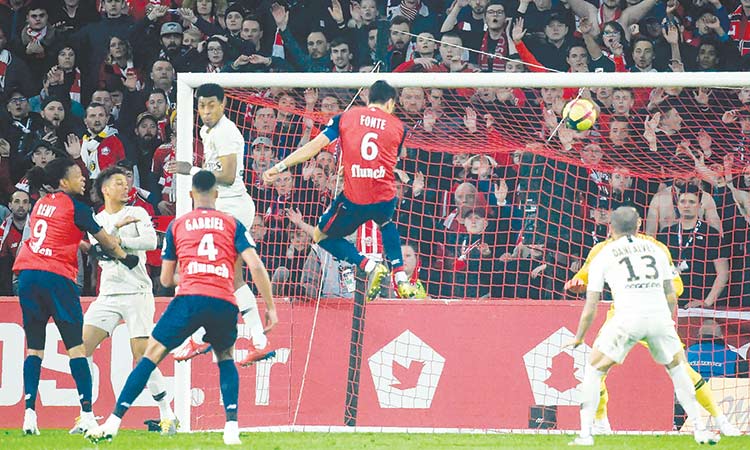 Paris Saint-Germain missed the chance to seal their sixth Ligue 1 title in seven years for the second week running on Sunday after a 5-1 hammering at Lille, their biggest league defeat in 10 years.

Thomas Tuchel’s side could have been crowned champions in record-equalling time last weekend but failed to beat Strasbourg, and they fell short again on Sunday despite needing just a point in a match that saw them have to play with 10 men for 54 minutes and lose both captain Thiago Silva and Thomas Meunier to injury.

The loss was PSG’s worst domestic defeat since going down 4-0 at Bordeaux in 2009, and the first time they had conceded five goals in the league since another 5-1 defeat at Sedan way back in 2000.

However they are still 17 points clear of second-placed Lille and if they win at Nantes on Wednesday they will still win the league with six matches to spare.

World Cup winner Mbappe had already had one goal chalked off by the officials when a comical Meunier own goal set Lille on their way after six minutes.

But PSG looked set to seal the title when Juan Bernat levelled soon after and Mbappe roofed what looked like his 28th league goal of the season in the 13th minute, only to see that one also rightly disallowed.

Silva left the field with a knee injury soon after and after Meunier was pulled off, Bernat was then handed a debatable straight red card in the 36th minute for a tug on Nicolas Pepe despite a VAR check.

Attacker Pepe slotted home Lille’s second five minutes after the break when he latched onto a superb Jonathan Ikone through ball and after that the floodgates opened. Jonathan Bamba smashed home the third 14 minutes later from another Ikone assist and two fine headers from Gabriel and Jose Fonte in the final 20 minutes completed the rout and put Lille eight points ahead of third-placed Lyon.

Earlier on Sunday, Saint-Etienne closed in on Champions League football after Mathieu Debuchy scored twice in a 3-0 win over Bordeaux that moves them to within three points of Lyon.

Wahbi Khazri opened the scoring from the spot 10 minutes after the break following a VAR check of Sergi Palencia’s handball before Debuchy headed home the second from a corner to seal the points 17 minutes before the end.