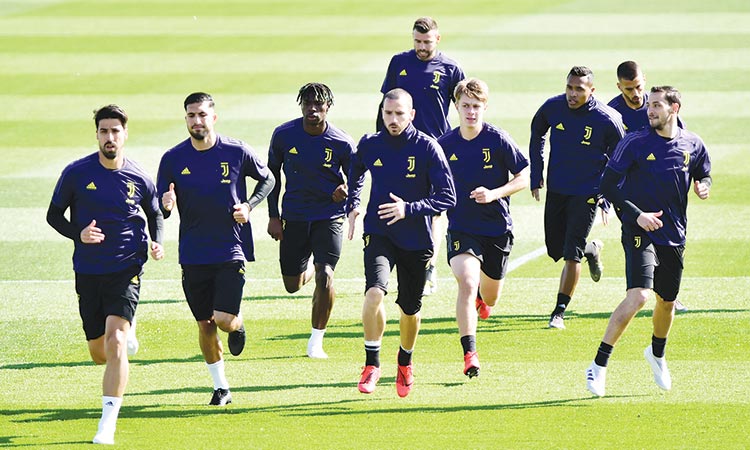 Juventus players attend a training session ahead of their Champions League quarter-final 2nd leg match against Ajax in Torino on Monday. Reuters

Manchester United are the ones looking to emulate Atletico Madrid, Juventus and Roma by sending Barca out in the quarters for a fourth year running but for the Catalans, another failure would be unforgivable, not least because of the implications for their captain.

“Last season we did the double but we all felt bad about how it went in the Champions League,” Messi said in August. “We promise this season we will do all we can to bring that beautiful cup back to Camp Nou.”

Barcelona’s dominance in Spain has been shaped by Messi, who only this month overtook Iker Casillas as the player with the most La Liga victories, 335, in its history.

Those wins have helped them capture seven of the last 10 league titles, a figure that will surely become eight from 11 next month, given their nine-point lead at the top of the table.

There could be an historic fifth consecutive Copa del Rey too if Ernesto Valverde’s side beat Valencia on May 25.

But in Europe, Barca would appear under-marked, with only one success in the last seven years, three in 10 since Pep Guardiola took charge in 2008 and set in motion what has felt, in playing terms at least, like an iconic era.

The list of clubs etched onto the cup hoisted at the Wanda Metropolitano on June 1 will instead show a decade swallowed up by Real Madrid, whose domestic failings in that period have been exonerated by four Champions League triumphs in five years.

“Obviously it’s infuriating,” Luis Suarez said. “Madrid have made history and it’s a thorn in our side.”

Messi’s record is similarly unbalanced. He has nine La Liga titles and is by a distance the competition’s top scorer, with an astonishing 414 goals. Cristiano Ronaldo, closest in second, has 311.

But in the Champions League, Messi has lifted the trophy four times, a relatively modest return given it puts him on a par with 11 current Real Madrid players alone, including Nacho, Casemiro and Dani Carvajal. This year, Ronaldo is hunting his sixth.

And while Messi dwarfs the Portuguese for goals in La Liga, the opposite is true in Europe, where Ronaldo has 125 goals to his 108.

The game’s most illustrious pair could yet meet in this year’s final, should Barca capitalise on their 1-0 first-leg win over United and then overcome either Liverpool or Porto in the semis.

It means the pressure on Barcelona in this competition runs deep, a psychological burden that perhaps United, or their next opponents, will use to their advantage. For Messi, there is work to do.

Cristiano Ronaldo will spearhead Juventus’ old guard as they look to finish the job on Tuesday against Ajax’s impressive young guns in a quarter-final clash between two sides desperate to end years of Champions League heartbreak.

Juventus have the edge on away goals thanks to Ronaldo’s 125th Champions League goal in a 1-1 draw in Amsterdam, but Ajax’s David Neres ensured the teams will start on a knife-edge in Turin in a repeat of the 1973 and 1996 finals.

Juventus have put their bid to wrap up an eighth consecutive Serie A title on the back burner as they focus on their European ambitions.

Massimiliano Allegri lined out with a young squad against lowly SPAL on Saturday and the champions fell to a 2-1 defeat when a point would have sufficed for another Scudetto.

“The Scudetto will come sooner or later,” said Allegri, whose side hold a 17-point lead on second-placed Napoli with six games left.

“If we had put all our starters in, it would have been easier to win it, but there is the goal to obtain on Tuesday.”

Juventus have won the Champions League twice, most recently in 1996 when they beat Ajax in the final.

Four-time winners Ajax won their third consecutive title in 1973 at the expense of Juventus, last lifting the trophy in 1995.

Allegri said he was prepared for “a difficult match against a very impressive team”.

Ronaldo was rested at the weekend along with regulars Leonardo Bonucci, Blaise Matuidi, Alex Sandro, Mario Mandzukic and Miralem Pjanic.