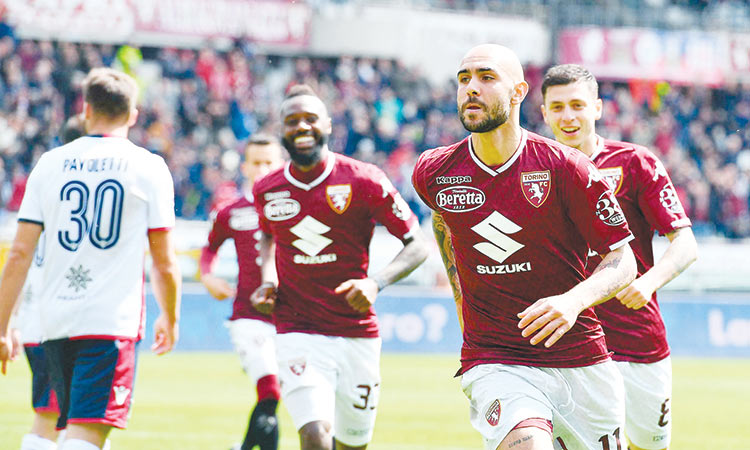 Simone Zaza scored for Torino before seeing red as the northerners hopes of Champions League football next season diminished on Sunday with a 1-1 draw against Cagliari, who themselves had two sent off, as Sampdoria rekindled their Europa League ambitions with a 2-0 derby win over 10-man Genoa.

Three red and nine yellow cards were handed out in Turin, including the sending off of Zaza who had opened the scoring after 52 minutes after connecting with a perfect low cross from Armando Izzo for his third goal this season.

But the Italian forward was dismissed on 74 minutes for arguing with referee Massimiliano Irrati over a free kick awarded against him.

The Sardinian side had two players sent off late with Luca Pellegrini and Nicolo Barella both receiving second yellow cards in the final minutes.

In Genoa, veteran striker Fabio Quagliarella provided the cross for Gregoire Defrel’s opener after three minutes and then added a second from the penalty spot after 53 minutes to go top of the Serie A scorers chart with 22 goals.

Genoa played most of the second half a man down after Davide Biraschi was sent off for a handling offence which resulted in the penalty.

In Tuscany, Vincenzo Montella’s first game as Fiorentina coach ended with a goalless draw at home against relegation-candidates Bologna, pushing their winless run to eight games before next week’s clash with Juventus in Turin.

Fiorentina, in 10th position, are 12 points off the Europa League places.

AC Milan strengthened their grip on fourth place in Serie A with a tense 1-0 win over Lazio at San Siro on Saturday that ended with a scuffle breaking out between players from both sides.

Gennaro Gattuso’s side knew they had to win to remain in the final Champions League qualification spot after AS Roma had defeated Udinese 1-0 earlier in the day.

Franck Kessie’s penalty 10 minutes from time secured a vital three points for Milan against one of their rivals in the race for a top-four finish, extending their lead over Lazio to six points. However, Lazio have a game in hand.

Tensions spilled over after the final whistle as a melee broke out between the two sets of players who will face off again at the San Siro on April 24 in the second leg of the Coppa Italia semi-final. The first leg ended goalless in Rome.

Milan are fourth on 55 points, two behind third-placed Inter Milan.

Fifth-placed Roma are just one point behind Milan, while Atalanta (52) and Torino (49) still have to play in this round of matches.

Ciro Immobile threatened for Lazio early on as his low shot drew an agile save from Pepe Reina and the Italy striker came close again just before halftime when his angled finish came back off the outside of the post.

The home team created chances of their own as Krzysztof Piatek headed narrowly wide on the half-hour mark before the Pole had a shot charged down by goalkeeper Thomas Strakosha after the break.

With just over 10 minutes remaining, referee Gianluca Rocchi awarded Milan a penalty for handball, only for the decision to be overturned following a video assistant referee (VAR) review.

However, only a minute later Rocchi again pointed to the spot when Lazio substitute Riza Durmisi barged into Mateo Musacchio inside the area, and Kessie stepped up to send the goalkeeper the wrong way from 12 yards.

Strakosha acrobatically tipped away a curling effort from Suso in stoppage time, before Lazio had their own penalty appeals waved away following Ricardo Rodriguez’s tackle on Sergej Milinkovic-Savic.