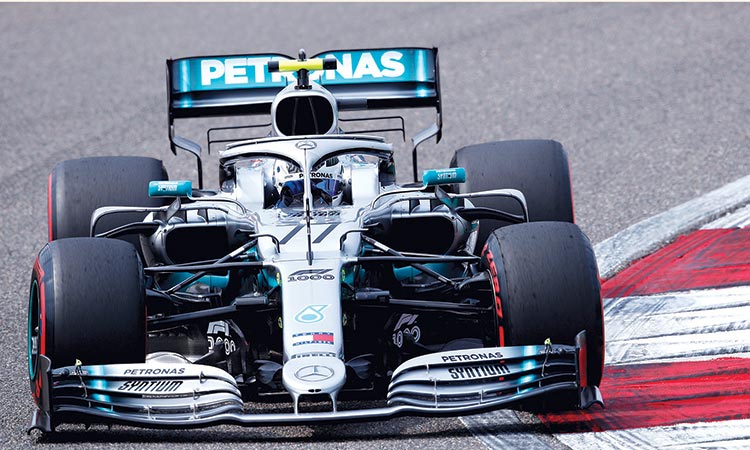 Mercedes driver Valtteri Bottas steers his car during the qualifying session for the Chinese F1 Grand Prix in Shanghai on Saturday. Associated Press

Sebastian Vettel was third-fastest for Mercedes’ arch-rivals Ferrari for the race in Shanghai, the 1,000th grand prix in Formula One.

Bottas, who leads the world championship by a point ahead of title-holder Hamilton after two races, scorched to a best time of one minute 31.547 seconds.

That was just 0.023 secs ahead of Hamilton, the Briton who has been wrestling with his Mercedes and has voiced concern about Ferrari’s superior straight-line speed. Mercedes though appear to have the edge on the corners.

“The car has been really good this weekend and Lewis also improved a lot in qualifying, it was super close,” said the flying Finn Bottas, who is beginning to climb out of the shadow of his more famous team-mate.

Vettel, the four-time world champion who has been in the spotlight after a series of unforced errors stretching back to last season, was 0.301secs off Bottas.

The German this time got the better of his decade-younger Ferrari team-mate Charles Leclerc, who is fourth on the grid and failed to so far to match his performance last time out in Bahrain.

The young Dutchman Verstappen was infuriated after traffic prevented him from clocking a final, flying lap, and made his anger clear in an expletive-filled message over his radio.

Seventh and eighth were the Renault duo of Daniel Ricciardo -- last year’s victor in China -- and Nico Hulkenberg.

Bottas though is the man in form, going fastest in the last two practice sessions after Vettel topped the times in first practice. Bottas had also gone quickest in Q1, but five-time world champion Hamilton was marginally faster in Q2.

Hamilton, who snatched victory in Bahrain after Leclerc’s Ferrari failed, said that he had been “struggling with the car so I was just battling the thing”, despite joining Bottas on the front row.

“Valtteri was particularly quick in the first sector so I was experimenting throughout the session,” said the 34-year-old, a five-time winner in Shanghai.

Hamilton conceded that “Valtteri’s been stellar all weekend”. 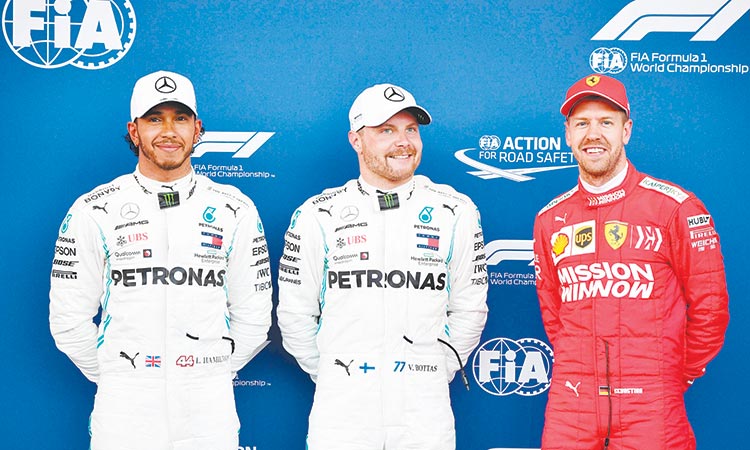