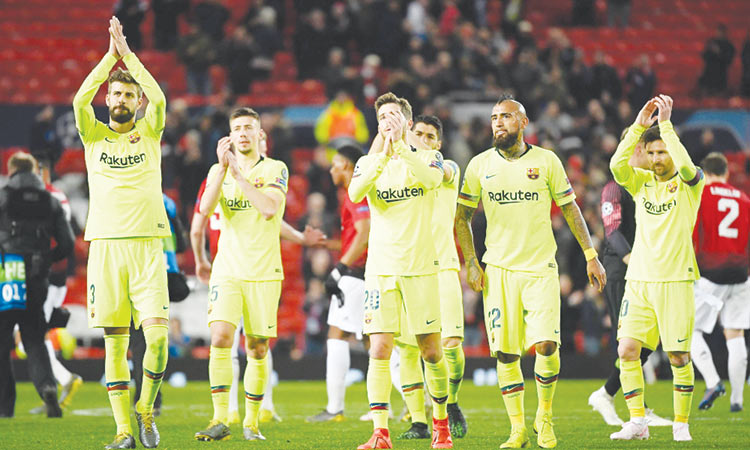 After their 1-0 win over Manchester United at Old Trafford on Wednesday, Gerard Pique said Barca are tighter at the back than they have been all season.

“We put in an excellent performance defensively, we’re in our best form in defence of the season,” Pique said.

“The early goal relaxed us and we knew how to cope with the situation, the fact we didn’t concede helps us a lot.” Barcelona face a trip to La Liga’s bottom-club Huesca on Saturday, when Ernesto Valverde is likely to rotate his line-up ahead of the return leg against United three days later.

An 11-point lead at the top of the table has earned Barca that luxury, while United face West Ham the same afternoon, still scrapping for a place in the Premier League’s top four.

To turn the tie around, Ole Gunnar Solskjaer’s team will have to score at least once at Camp Nou, where their opponents have endured only one defeat in 52 matches and, in the Champions League, one in 10 years.

Nerves could yet affect Barcelona, whose entire season seems to hinge on their performance in Europe, but they now have a defence too that can step up when the attack stalls.

Messi, bruised and bloodied, was quiet against United, a muted display typical of his team, who struggled for their usual fluency going forward.

Instead, it was Pique that shone, the 32-year-old delivering arguably his best showing of the season as part of an impressive, disciplined defensive display.

“Sometimes you go on the attack and leave the defence open but we sat in more and balanced the game.”

Under Valverde, Barcelona’s free-flowing, passing style has been given a more pragmatic edge, with solidity and athleticism deemed key ingredients to allow Messi and Suarez to thrive.