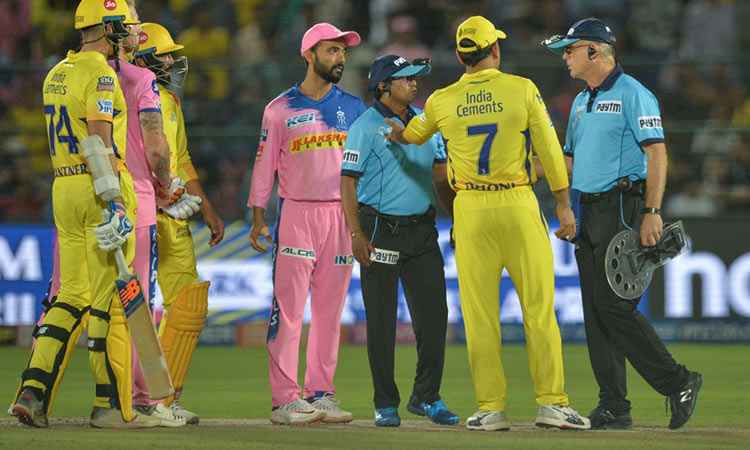 MS Dhoni (centre) speaks with empires during the match at the Sawai Mansingh Stadium in Jaipur on Thursday. Sajjad Hussain / AFP

Chennai Super Kings (CSK) captain MS Dhoni has been fined 50 per cent of his match fees for breaching the IPL Code of Conduct during his team's match against Rajasthan Royals in Jaipur.

Dhoni admitted to the Level 2 offence 2.20 of the IPL's Code of Conduct and accepted the sanction.

The incident took place in the last over of the Chennai innings. With eight runs required off the last three balls, Ben Stokes bowled slower full toss. While leg umpire Bruce Oxenford didn't raise his arm, Ulhas Gandhe did and the buzzer also went off in the stadium, which signifies that a no-ball has been called. But seeing Oxenford's reaction, Gandhe then dropped his arm and changed the earlier call.

This saw MS Dhoni storm into the field and have a long chat with both the umpires. In fact, he was seen constantly saying that Gandhe did call it a no-ball before the decision was overturned.

Rajasthan Royals all-rounder Stokes — the bowler in the episode — also joined in and a disappointed Dhoni finally walked back to the dugout. But CSK had the last laugh as Santner hit a six off the last ball to win the game for Chennai.

While no mention of the episode was made during the post-match presentation by either Murali Karthick or Dhoni, former Australia pacer Brett Lee said that the CSK skipper should have avoided stepping onto the field.