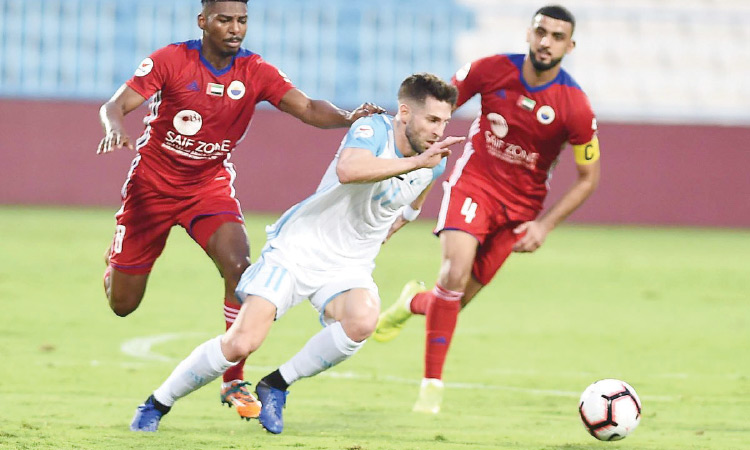 Players of Sharjah and Bani Yas in action during their Arabian Gulf League match on Friday. Courtesy Twitter

Bani Yas needed only three minutes to take the lead. A through-pass from Leroy George found Suhail Alnoobi on the edge of the box and the latter tapped home past Adel Al Hosani to give his side a 1-0 advantage.

The guests tried to respond through Ryan Mendes and Welliton, but their shots lacked accuracy. Mendes had a golden chance to score the equalizer but his effort from inside the box was diverted into a corner by Haboush Saleh.

It was Igor Coronado, however, who leveled things up in the 36th minute. After finding Saif Rashid’s pass, the Brazilian forward went one-on-one with the keeper before slotting past Fahad Mohamed Aldhanhani.

Pedro Conde had a chance early in the second half, but his effort was denied by Alhosani.

The King went 2-1 up in the 74th minute, thanks to Coronado’s penalty. The guests were awarded a penalty after Robson De Paula fouled Welliton inside the box. The Brazilian forward netted the ball in the middle of the net to give his side the lead.

Leroy George came close to netting a late equalizer for the Sky Blues but his free-kick was saved by Alhosani five minutes from time.

Sharjah collected another three points to move a step closer to the league title as they top the table on 50 points. Meanwhile, the Sky Blues suffered their first defeat at home this season and remained in fifth place on 33 points.

In another match, Yaseen Mahmoud’s late penalty handed Dibba an important 2-1 win over Fujairah in the derby at the Fujairah Stadium.

Fujairah got off to a strong start with Mohanad Khameis and Mohamed Benyettou testing Dibba keeper early in the game. The Algerian forward came close to netting a fantastic scissor-kick goal but was denied by Abdulla Sultan in the sixth minute.

Benyettou’s efforts paid off soon after, as he found the back of the net in the 12th minute. He sent a powerful long-range shot from outside the box that nestled into the left corner of the net. This marked his ninth goal of the season.

The guests’ lead, however, didn’t last long as Khaled Abdulla leveled the scoreline two minutes before the half-hour mark. Yaser Abdulla’ free-kick inside the box was headed by Yousef Al Rawashdeh into Khalid’s path and the latter slotted home past Abdulla Altamimi to make it 1-1.

Khameis came close to giving Fujairah the lead in the 65th minute, however, Sultan pulled off another impressive save as he denied the Fujairah forward from long distance.

With eight minutes to go, Altamimi denied Khalid Abdulla’s header to keep the game deadlocked at 1-1.

As the derby seemed to be headed for a draw, the Sailors were awarded a penalty only three minutes from time. Yaseen Mahmoud made no mistake as he converted from the spot to give his side valuable three points.

This marked Dibba’s third league win this season as they are currently fighting to escape relegation. They sit at the bottom of the table on 11 points, three points behind their opponents Fujairah who sit in 12th place.

Meanwhile, on on Saturday Kalba will host Al Jazira at 5:50pm and at 5:55pm Al Ain will face Ajman at the Hazza Bin Zayed Stadium. The Boss will be looking to recover from their 5-1 thrashing against Al Jazira to regain second place after they were overtaken by Shabab Al Ahli. They are now third on 38 points.

They will, however, face a tough opponent as the Oranges held leaders Sharjah to a goalless draw last week to sit eighth on 24 points.

Matchweek 20 concludes with Al Wahda and Al Nasr clash, which will be held at Al Nahyan Stadium at 8:30pm. The Clarets, who are looking to move closer to the top three, drew with Al Dhafra in matchweek 19 to sit sixth on 31 points.