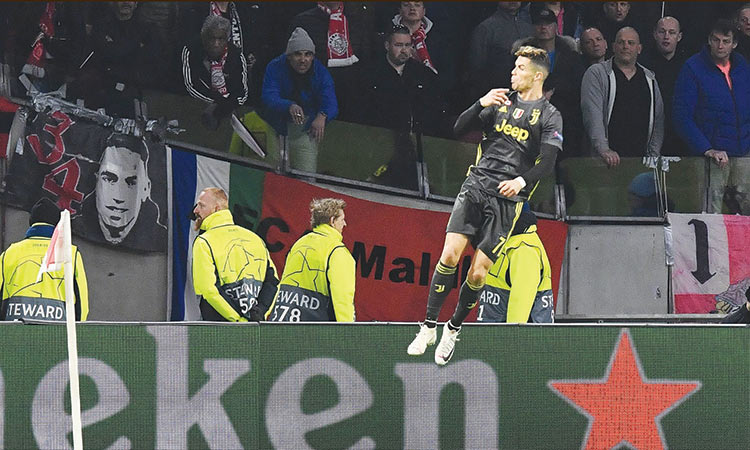 Chris Smalling’s clattering challenge in the first half could mean Messi is spared Barca’s visit to Huesca on Saturday, their 11-point lead in La Liga affording Ernesto Valverde the luxury of preserving his captain for next week’s second leg.

“He was certainly not comfortable, that’s obvious,” Valverde said after his team’s gritty 1-0 win at Old Trafford on Wednesday.

A fresher and sharper Messi would hardly make United’s task any easier.

Ole Gunnar Solskjaer was keen to invoke memories of their comeback against Paris Saint-Germain in the previous round but it will be an altogether different task winning at Camp Nou, where Barca have lost only once in 52 matches and not in the Champions League since 2013.

They faced pressure at Old Trafford but few genuine moments of discomfort, demonstrated by United’s failure to muster a single shot on target, for the first time in this competition since March 2005.

“Lacking talent on the field, this United team has to resort to faith,” wrote     Diario Sport.

“The roar of the stadium spurred the players on but it was nothing that could affect Barca.”

Their victory was, in part perhaps, due to their opponents’ lack of punch but there was merit too in navigating a sloppy performance with both maturity and resilience.

“Neither Messi nor his teammates had their brightest night in Manchester,” wrote Mundo Deportivo.

“But Valverde’s 11 played with common sense and tactical rigour.”

Since Solskjaer’s arrival, United’s greatest threat has been on the counter-attack while Barcelona have been exposed on the break this season by the likes of Real Betis, Sevilla and Levante. Valverde’s team limited the danger by sitting deep.

“They put us under pressure but we controlled it well,” Gerard Pique said.

“Sometimes you go on the attack and leave the defence open but we sat in more and balanced the game.”

Pique endured a chaotic start to the season, his form and focus questioned in the autumn when Barcelona’s defence looked leaky. But Pique has got better and better, his performance on his return to Manchester perhaps the peak of what has been an impressive few months since the turn of the year. Luis Suarez continued his rich vein of form too, delivering again when it mattered most. After his goal sent Barcelona to victory over Atletico Madrid last weekend, it was his header that met Messi’s cross in the 12th minute and proved this game’s decisive moment as well.

Luke Shaw’s touch deprived Suarez of his first away goal in the Champions League since September 2015, but the satisfaction was evident in the former Liverpool striker’s celebration, performed at the Stretford End in front of the fans that had jeered his every touch.

Meanwhile, Cristiano Ronaldo was again hailed by Juventus coach Massimiliano Allegri after scoring with his side’s only shot on target to earn a 1-1 draw away to an excellent Ajax in the first leg of their Champions League quarter-final in Amsterdam on Wednesday.

On his return from a thigh injury, Ronaldo subdued the 50,000 home fans in the Johan Cruyff Arena when he headed Juventus in front on the stroke of half-time to take his record goal tally in the competition to 125.

However, Brazilian winger David Neres conjured a stunning equaliser almost immediately after half-time to give Ajax a draw that was the very least they deserved.

Despite that, it is Juventus -- for whom substitute Douglas Costa struck a post late on -- who hold the upper hand heading into next Tuesday’s return in Turin, with the winners of this tie facing Manchester City or Tottenham Hotspur in the last four.

“Ronaldo showed that he is on a different level. His timing and movement are different to everyone else’s, there’s nothing you can do about it,” said Allegri.

Ronaldo had not played for his club since scoring a hat-trick to dump out Atletico Madrid in the last 16, and his goal here saved the visitors in the face of another fine Ajax performance.

“Ajax have great quality. We suffered after their goal but we defended well and finished the game better,” added Allegri.

Ronaldo won the trophy in the last three seasons with Real Madrid, but a fearless Ajax ended the Spanish side’s European hegemony in the previous round after a thrilling 4-1 victory in Spain.

This result allows them to maintain hope ahead of the return, even if they might feel they should have won here.

United announced on Friday that it struck an agreement with Juventus to sign the five-time Ballon D’or winner and he has completed his medical examination and signed the two-year contract, with the option to extend for a further year.