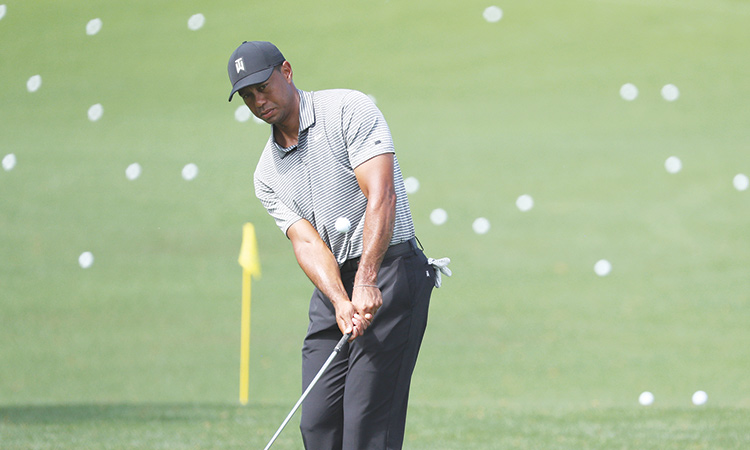 Tiger Woods plays a shot during the second day of a practice session ahead of the Masters at the Augusta National Golf Club. Reuters

Tiger Woods enters the Masters confident he can capture his 15th major title and fifth green jacket after contending in the past two majors and ending a five-year victory drought.

The 14-time major winner rebounded from spinal fusion surgery to win his 80th career US PGA title in last year’s Tour Championship after threatening at the British Open and PGA Championship.

“It proved to me that I could win again,” Woods said. “To lead it wire-to-wire, that made it that much more special.” For the first time since 2013, Woods arrives at Augusta National healthy and boosted by a recent victory. I feel like I can win,” Woods said. “I’ve proven that I can do it and I put myself there with a chance to win the last two major championships. I was right there.

“I’ve improved a lot over the past 12, 14 months, but I’ve more than anything just proven to myself that I can play at this level again. I’ve worked my way back into (being) one of the players that can win events.” Rivals are convinced the 43-year-old US star still has what it takes.

Five-time major winner Phil Mickelson sees Woods, who hasn’t won a major since the 2008 US Open nor a Masters since 2005, threatening the all-time record of 18 major wins by Jack Nicklaus.

“Greatness is still in him,” said Mickelson. “And I would never rule him out.” Brooks Koepka, who outdueled Woods on Sunday to win last year’s PGA, knows the excitement a Woods major win would bring.

“It would be absolutely incredible to watch,” Koepka said. “We all know he’s back. There’s no doubt about that. Can he get it done? He seems like he’s competing. With the Open and the PGA, he has been very close. I wouldn’t be surprised this week if he’s knocking on the door.” Asked if he needed to win another Masters, Woods replied, “I don’t really need to win again. I really want to.” After years of nagging back pain, Woods doubted at one stage if he might ever have a normal life much less play golf again, much less win. But even he bows to Father Time when it comes to practice.

“The hardest part is I just can’t practice like I used to. My back gets sore,” Woods said. “I just can’t log in the time that I used to and that goes with every part of my game. That’s the challenge I face going forward.”

Where Woods once outdrove all foes and used easier iron shots to set up shorter putts on Augusta National’s infamous lightning-fast greens, now he relies on experience to give him an edge on longer and younger ball-bashers.