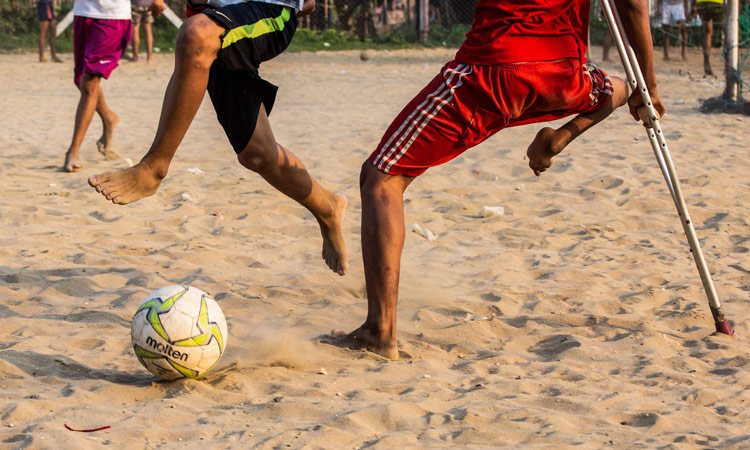 But the 16-year-old expertly navigates the pitch with just one leg and a crutch, the only disabled footballer on his team.

“Whenever I play football, I forget about my legs and I play as a normal person,” he tells AFP after celebrating his goal with team mates.

On sandy ground in the outskirts of Yangon, he dribbles a ball with incredible agility, pivoting expertly on the crutch before shooting to score with his left foot.

Kaung Khant Lin was born with a stump for a right leg that today protrudes from his football shorts.

He remembers first kicking a ball around the streets when he was five, keeping his balance on a wooden crutch crafted by his uncle.

Now he sees himself as pretty versatile on the pitch and doesn’t even see his disability as his main weakness.

“Nobody can get past me. But it’s hard for me to defend against free kicks as I’m short.”

Nearly one in 50 people in Myanmar has some form of walking disability, according to the country’s latest census in 2014.

Unlike Kaung Khant Lin, many are survivors of landmines planted in the conflicts plaguing the country’s restive borderlands.

“Most people think that those with disabilities cannot work,” she says.

Kaung Khant Lin has so far defied the odds, even rising to local fame in a football tournament on Independence Day, a public holiday in January when communities compete in team games.

His two goals helped propel his side to victory and also clinched his award of “Player of the Tournament.”

Teammate Moe Sat Han, 14, explains how they used to worry about their friend’s leg getting broken but there was no way they could stop him playing.

They often play the whole day from morning until night, even forgetting to eat, and that’s when “his Dad gives him a huge telling off,” Moe Sat Han confides.

Kaung Khant Lin’s father, a 41-year-old painter and decorator, admits he cannot even bring himself to watch his son play.

“I don’t want to see him get injured in front of me,” Soe Min Htun says, adding he just wants his son to go to university to get an education.

Kaung Khant Lin is working hard at school in the hope of studying mechanical engineering — even if he dreams of becoming a football coach one day.

In the meantime, however, he will keep trying to emulate his hero, Argentine and Barcelona legend Lionel Messi.

“He’s left-handed and I am too,” he says. “I practise free kicks just like he does.”