Women open historic round at once all-male Augusta National - GulfToday 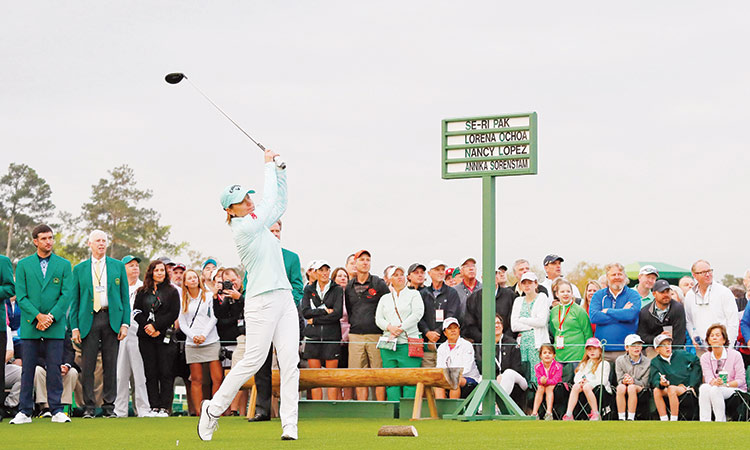 Annika Sorenstam takes part in the First Tee ceremony prior to the final round of the Augusta National Women’s Amateur on Saturday. Agence France-Presse

In a club that opened in 1933 but didn’t admit its first women members until 2012, LPGA legends Pak Se Ri, Annika Sorenstam, Lorena Ochoa and Nancy Lopez hit ceremonial shots off the first tee to launch the historic final round of the inaugural Augusta National Women’s Amateur.

“It’s just exciting to be a part of history,” Lopez said.

“A day of history for us, for the amateurs that are here and for Augusta National.” A field of 72 played the first 36 holes at nearby Champions Retreat before the event moved to the famed Masters layout, with everyone having a practice round Friday but only the top 30 advancing to compete in the last 18 holes of the tournament.

“It’s a dream come true. I’m so happy for them,” Sorenstam said.

“This has huge potential to not just inspire young girls but golfers, other women in sports and women in business.”

American Anna Redding, a University of Virginia senior, was the first competitor to tee off, but she was eight strokes adrift of US leader Jennifer Kupcho. The Wake Forest University senior led after 36 holes on 5-under par 139 with Mexico’s Maria Fassi, a University of Arkansas senior, one stroke behind.

Augusta National’s all-male status led to a 2003 protest across the street from the club but it was not until August 2012 when businesswoman Darla Moore and former US Secretary of State Condoleezza Rice were named the club’s first women members.

Meanwhile, young Thai talent Sadom Kaewkanjana held his nerve on Saturday to become the fastest qualifying school graduate to win on the Asian Tour when he clinched the Bangabandhu Cup Golf Open by one shot.

Sadom, playing in his first Asian Tour start this season, overcame a spirited challenge from India’s Ajeetesh Sandhu to finish the final round with a one-under 70, to card an overall score of 19-under 265 at the Kurmitola Golf Club in Dhaka.

One time Asian Tour winner Sandhu carded a six-under 65 on the final round but finished just short of Sadom overall with 266 in the $350,000 tournament.

Sadom, who bagged $63,000 in prize money, broke the record of Australian duo Kane Webber and Todd Sinnott, who won in their second starts after coming through the qualifying school in 2006 and 2017 respectively.

Earlier, on Friday, South Korea’s Kim Si-woo fired a brilliant hole-in-one to surge into a four-shot lead at the Valero Texas Open in San Antonio.

The 23-year-old from Seoul, who had posted a six-under-par 66 to lead after Thursday’s first round, delivered another dazzling outing at TPC San Antonio’s AT&T Oaks Course to pull clear of a crowded field.

The highlight came on the 167-yard par-three 16th, when Kim uncorked a superb nine iron for only the second ace of his career.

That moment of magic helped turn a two-shot lead into a four-shot cushion, leaving Kim at 12 under with two to play. Two more pars completed a six-under-par 66 round.

Earlier Kim had bided his time, picking up two birdies on the front nine, with an 11ft birdie putt on the eighth putting him at two under for the day, eight under overall.