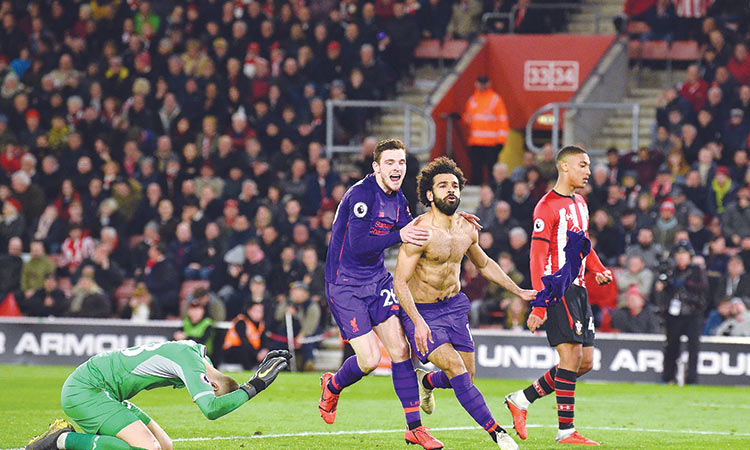 Liverpool’s Mohamed Salah celebrates with Andrew Robertson (centre) after scoring a goal against Southampton during their EPL match on Friday. Agence France-Presse

Jurgen Klopp insists he never doubted Mohamed Salah as the Egyptian ended an eight-game scoring drought to help fire Liverpool back to the top of the Premier League.

Salah returned to scoring form with an outstanding solo run and finish as Liverpool recovered from falling a goal behind to beat Southampton 3-1 at St Mary’s and move two points clear of Manchester City.

The title remains in City’s hands, however, as the English champions have a game in hand.

However, Liverpool continue to pile on the pressure in their pursuit to end a 29-year wait to win the league.

Klopp’s side appeared in danger of dropping valuable points until Salah intervened in the 80th minute to claim his 50th Premier League goal for Liverpool in only his second season at the club.

“It was never in doubt that he was a great player in my side,” said Klopp.

“It was goal number 50 for Liverpool, an incredible number. He’s very consistent.”

Salah has been criticised in recent weeks for being too selfish in front of goal in desperation to end his scoreless streak.

Yet, on this occasion he chose the right option despite the presence of Roberto Firmino in support.

When asked if he considered playing in the Brazilian, Salah told Sky Sports: “Not at all. As a striker you need to score. I made my decision to shoot.”

Liverpool were once again forced to demonstrate their resilience as they struggled to find their most fluent form after Southampton established a ninth-minute lead through Shane Long.

Naby Keita equalised in the 36th minute with his first Liverpool goal but it was not until Salah struck that Klopp’s side could be confident of moving two points ahead of City at the head of the table.

Jordan Henderson wrapped things up in the 86th minute, but Klopp admitted his side were again not at their best, requiring late interventions just as they had in beating Tottenham Hotspur and Fulham in their previous two league games.

“The performance was not top level but it is about fighting,” he said.

“People want us to play like Manchester City, we are unable to do that, we play our own football.

“We have 82 points now, that is massive in this crazy league and everyone is waiting for us. I am really proud. It is incredible.

“It is a difficult year for everybody, you need to have 70-75 points for the Champions League and 90-something for the title. We are in the race and that is nice.”

Klopp acknowledged the introduction of Henderson and James Milner midway through the second half fired up Liverpool’s late rally.

“We have to work for it, the moment will come but all three goals were brilliant.

“It is nice for Naby Keita to score the first to show Southampton it will not be easy for them. After that we controlled it more. It was good, I liked it.”

Southampton remain five points clear of the bottom three and manager Ralph Hasenhuttl admitted his disappointment at his side’s failure to hold on.

“If you take the lead after five minutes, you are going in the right direction,” said Hasenhuttl.

“There is still a way to go but if you are a sportsman you are always frustrated if you are not winning. Not many have won against them this season, we had chances.”

Ashley Barnes went from zero to hero as Burnley boosted their bid for Premier League survival with a crucial 3-1 win against Bournemouth on Saturday.

Sean Dyche’s side made the worst possible start at Dean Court when Barnes headed into his own net as he tried to clear under pressure from Bournemouth’s Nathan Ake in the fourth minute.

However, Burnley were gifted an equaliser in the 18th minute as Bournemouth keeper Asmir Begovic let Ashley Westwood’s corner go straight through his hands and Chris Wood nodded in at the far post.

Burnley were well on top and Barnes struck at the right end in the 57th minute.

Once again Begovic was guilty of poor handling, allowing the ball to slip to Wood, who laid it back for Barnes to slot into the empty net.

Burnley are eight points clear of the relegation zone, and although third bottom Cardiff have a game in hand, Dyche’s men have taken a major step towards staying up.

Leicester powered to a 4-1 rout of relegated Huddersfield as Brendan Rodgers’ side moved into seventh. Youri Tielemans put Leicester ahead at the John Smith’s Stadium with his second goal since joining on loan from Monaco. The Belgian midfielder netted with a deflected strike from the edge of the area after Huddersfield were unable to clear Jamie Vardy’s miscued shot in the 24th minute.