City in FA Cup final after Jesus header, on course for quadruple - GulfToday 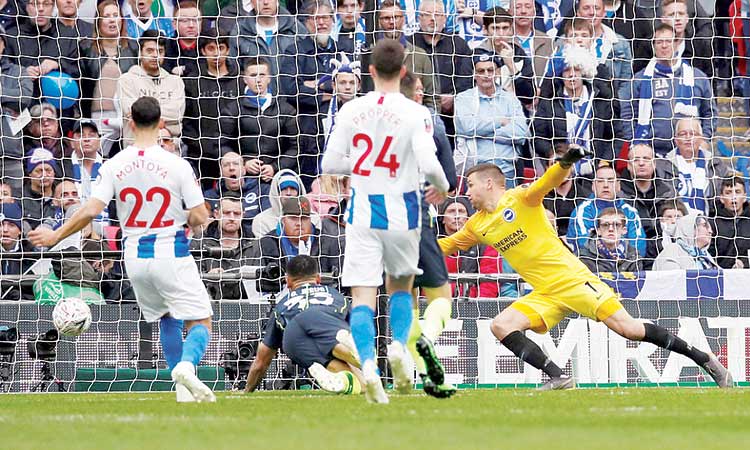 Pep Guardiola’s men will return to Wembley to face either Watford or Wolves on May 18 for what they hope will be the chance to clinch the first ever domestic treble in English football history.

City looked set for an easy afternoon when Jesus opened the scoring after just four minutes, but never hit top gear with one eye on their Champions League quarter-final, first leg at Tottenham on Tuesday.

And Brighton were left to rue a controversial decision not to send-off Kyle Walker just after the half hour mark for a clash with Alireza Jahanbakhsh.

With City staying in London until their trip to Tottenham’s new stadium in midweek, Sergio Aguero had travelled south on Friday but was not risked after a minor muscle injury.

Jesus stepped up in the Argentine’s absence by stooping to head home his 18th goal of the season, but the Brazilian’s opener owed much to a wonderfully inviting cross from Kevin de Bruyne.

That was the third time in as many games City had struck inside the first five minutes, but unlike in cruising past Fulham and Cardiff in the Premier League, they failed to put the game out of Brighton’s reach before the break.

The Seagulls grew into the game as the first 45 minutes wore on without really threatening an equaliser, but were left furious when Walker escaped a red card that could easily have changed the course of the game.

The England international was unhappy that Jahanbakhsh stood on his trailing leg as the pair jostled at the back post and went head-to-head with the Iranian.

However, after a VAR review, the yellow card shown to Walker by Anthony Taylor was deemed sufficient.

Walker was then replaced at half-time by Danilo to keep him out of further trouble, but City still failed to hit anywhere near the heights of their recent form to give Brighton hope.

However, Aymeric Laporte’s last-ditch clearance to prevent Glenn Murray forcing Shane Duffy’s header over the line was the closest they came to an equaliser.

The introduction of Fernandinho for the final 25 minutes allowed City to restore some order and Mat Ryan was forced into a fine save to stop Raheem Sterling adding a second on the day he had bought 550 tickets for pupils of his former school to get the chance to witness a Wembley showpiece.

City goalkeeper Ederson was not even forced into a save until four minutes from time when Jose Izquierdo stung the Brazilian’s palms from long range, but the English champions held on to take another step closer to history.

Meanwhile, Wolves and Watford, who meet in the FA Cup semi-final on Sunday, are seeking silverware to add lustre to a season in which they are both battling to be the “best of the rest” in the Premier League.

Nuno Espirito Santo’s Wolves nestle just below the top six after a second straight win against Manchester United this week, with Watford a point and a place below them in eighth spot.

The clubs clash at Wembley for the right to play quadruple-chasing Manchester City in next month’s showpiece final.

Wolves are steeped in the history of their famous title-winning sides of the 1950s and are four-time winners of the FA Cup, even if their last success was in 1960.

“Everybody knows what it could mean, but we have to play it just like another game, then make it special to make something happen, play the game,” said Nuno.

Watford, who were losing finalists in 1984, cannot boast the same historical pedigree but are punching above their weight in a cut-throat league.

On Tuesday they beat Fulham to reach 46 points, breaking their record Premier League tally and reaching their best mark in a top-flight campaign since 1986-87 (63).

Javi Gracia is the 10th manager at the club since the Pozzo family’s takeover of Watford in 2012, but the Spaniard is the first since Gianfranco Zola six years ago to last more than a season in charge and signed a new deal until 2023 with the Vicarage Road club in November.

“Both teams are playing well, getting points and we are both enjoying a good season,” said Gracia, whose team beat Wolves 2-0 in the Premier League earlier this season. 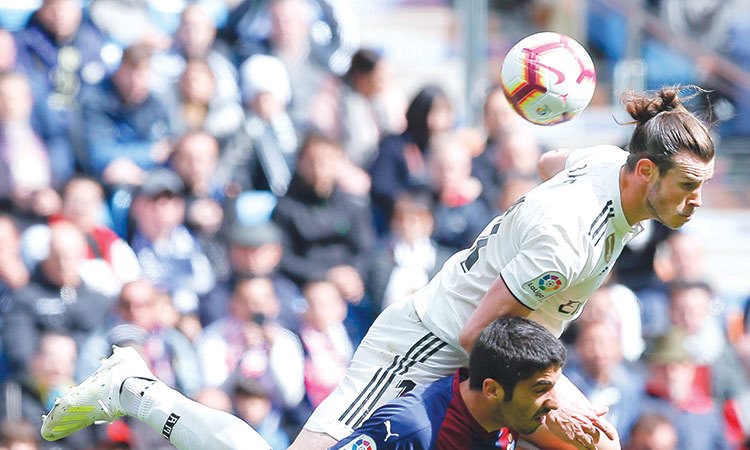 Zidane vague on Bale’s future after scrappy win over Eibar

Zinedine Zidane refused to guarantee Gareth Bale’s future at Real Madrid after the Welshman struggled again in a 2-1 victory over Eibar on Saturday.