City down Cardiff to leapfrog Reds at top; Spurs party in style - GulfToday

City down Cardiff to leapfrog Reds at top; Spurs party in style 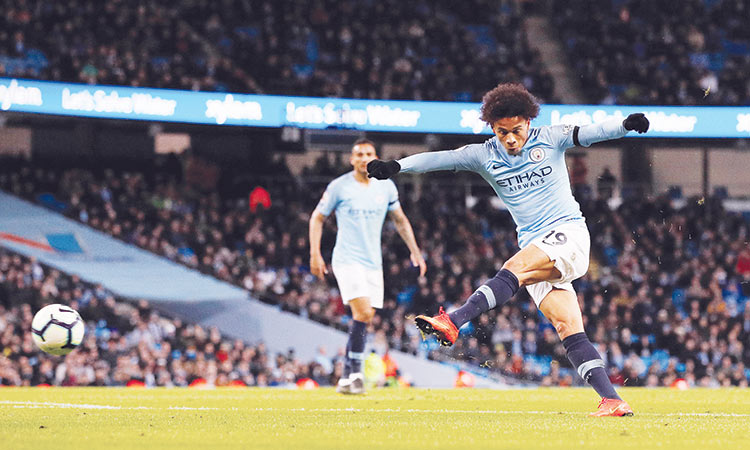 Manchester City brushed aside struggling Cardiff to leapfrog Liverpool at the top of the Premier League on Wednesday as Tottenham opened their glittering stadium in style to revive their faltering top-four hopes.

City’s 2-0 victory over Cardiff took Pep Guardiola’s quadruple-chasers to 80 points -- one clear of Jurgen Klopp’s Liverpool, with both sides having six matches to go.

Tottenham marked their long-delayed move into their state-of-the-art new home with a 2-0 win against Crystal Palace, while Chelsea thumped Brighton 3-0.

Kevin De Bruyne put City ahead in the sixth minute at the Etihad Stadium, firing in from a tight angle and Leroy Sane doubled the lead for the defending champions with a sharp finish just before half-time.

Guardiola, whose team take on Brighton at Wembley in the FA Cup semi-final on Saturday, made seven changes to his starting line-up, handing teenager Phil Foden his first Premier League start.

Despite the win, Guardiola said his side, who had 11 shots on target, needed to be more clinical.

“We played really well,” he said. “We started really well. A magnificent goal from Kevin De Bruyne. Unfortunately we missed a lot of chances, we need to score more goals.

“Phil Foden played excellent. He did everything, arriving in the right positions with the right tempo. He always has chances, has a sense of goal. He’s ready, we know it, to play any game in any position.”

The defeat leaves Neil Warnock’s Cardiff third from bottom, five points from safety, with only relegated Huddersfield and Fulham below them.

Spurs, who were on the edge of the title race for a large chunk of the season, started their match at home to Palace in fourth spot, behind north London rivals Arsenal.

But Son Heung-min and Christian Eriksen made sure the celebrations did not fall flat, scoring second-half goals that enabled Spurs to end a wretched run of four defeats in five league games.

Chelsea boss Maurizio Sarri made multiple changes from the team that started Sunday’s tense 2-1 win at Cardiff, with Eden Hazard and N’Golo Kante back in the starting XI.

But the main talking point was a first Premier League start for 18-year-old Callum Hudson-Odoi, who has already impressed for Gareth Southgate’s young England side.

Sarri has angered Chelsea fans with his refusal to start the winger and they vented their feelings at Cardiff on Sunday.

Hudson-Odoi was in the thick of the action at Stamford Bridge, setting up Olivier Giroud for just his second Premier League goal of the season in the first half.

Sarri said his team had returned to the good form they showed at the start of the season and praised Hudson-Odoi.

“Callum played very well and defended very well,” he said. “He has improved during the season a lot. He’s ready to play 90 minutes in very important matches.”

With the League Cup already in the bag, City are struggling to quell growing talk of a historic quadruple even as Guardiola attempts to keep his players’ feet on the ground.

After this weekend’s match against Brighton at Wembley, they will take on Tottenham in the first leg of the Champions League quarter-final, with a maximum of 13 games to make history.

The race for the top four is tight, with just three points separating third-placed Spurs from Manchester United, in sixth position.