Peterhansel and Sunderland remain the men to catch - GulfToday 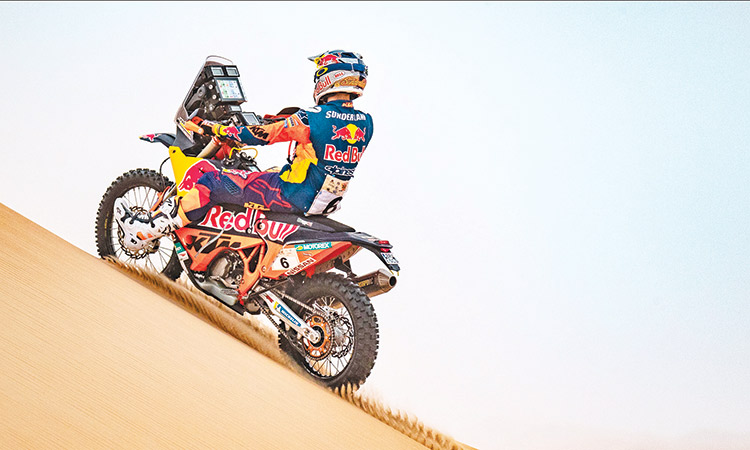 Sam Sunderland in action during the ADDC fourth stage.

Abu Dhabi: Stephane Peterhansel and Sam Sunderland retain lead  after a day of drama in the Abu Dhabi Desert Challenge (ADDC) set the scene for a thrilling last leg sweeping back to the UAE capital.

While Peterhansel extended his overnight cars lead to 18 mins 35 secs from the UAE’s Khalid Al Qassimi, the trail of misfortunes which stopped some of his main rivals in their tracks on the 286.10km ADNOC stage suggest that victory is anything but certain.

While the French five-times winner and wife Andrea in a Mini John Cooper Works Rally had a smooth passage through the dunes of the Rub Al Khali, setting the day’s fastest time, three of the overnight top five had days to forget.

The biggest casualty was Bernhard Ten Brinke who was lying second overnight but went out of the rally after the second of two incidents in his Toyota Hilux Overdrive.

He reached the service halt with the roof damaged and a wheel needing to be replaced after the car rolled on the stage. Shortly after restarting, another accident ended with Ten Brinke and co-driver Tom Colsoul being transferred by helicopter to hospital in Madinat Zayed. Their injuries were not believed to be serious.

Czech Jakub Przygonski, fastest on the previous leg, failed to even start Wednesday’s stage because of mechanical problems, eventually returning his John Cooper Works Buggy to the bivouac with his challenge over for another year.

Qassimi in the Abu Dhabi Racing Peugeot 3008 DKR was one of several drivers to be stopped by soft sand early on. He recovered and will find confidence in the fact that he started the final leg with a far greater deficit two years ago and went on to win.

Finishing the day in third overall another 27 mins 37 secs adrift was Poland’s Aaron Domzala in a Toyota Hilux Overdrive.

Completing the top six were Russia’s two-times winner Vladimir Vasilyev in a BMW X3 followed by the two CAN AM Maverick X3 buggies of Brazil’s Reinaldo Varela and American Casey Currie who are separated by just 43 seconds in the fight for the T3 title.

The reward in cross country rallying for winning a stage is being first away the next day, with no tracks to follow and the pack giving chase, and not for the first time overnight leader Sunderland felt the heat on Wednesday.

His was only the seventh fastest time, 12 mins 33 secs slower than Cornejo who is now breathing down his neck, with the battle for the title looking very much like a two-bikes race to the finish, barring any final leg disasters for the leading pair.

“We have seen again today how tough and unpredictable the Desert Challenge can be, and we look forward to a great finish tomorrow, knowing there could still be more surprises,” said Mohammed Ben Sulayem, President of the Automobile and Touring Club of the UAE, the rally organisers, and FIA Vice President for Sport. The rally finishes at Yas Marina Circuit at 5pm o Thursday.

Despite a difficult leg littered with time penalties, Qatari driver Mohammed Al Meer leads the T2 production class in a Nissan Patrol by more than nine hours from Latvian Aldis Vilcans in a Toyota Land Cruiser. In the quads, Kuwaiti Fahad Al Musallam on a Yama leads by 5 mins 38 secs from Poland’s Rafal Sonik.

Peterhansel completed the ADNOC leg to say: “It was a long stage today, and luckily we didn’t get stuck and kept on moving as it was a very difficult stage for the cars, with very complicated dunes. I like it this way. If it’s too easy I find it boring.”

Qassimi said: “It was difficult and we got stuck on the first section a lot. There was a lot of soft sand and we’re in a two wheel drive car.

“But we’re here now. I’m not sure where we finished in the timings because of the amount of time we spent digging ourselves out.” Domzala finished the stage to say: “Amazing day. We had a minor electric issue for around three minutes early on in the stage.