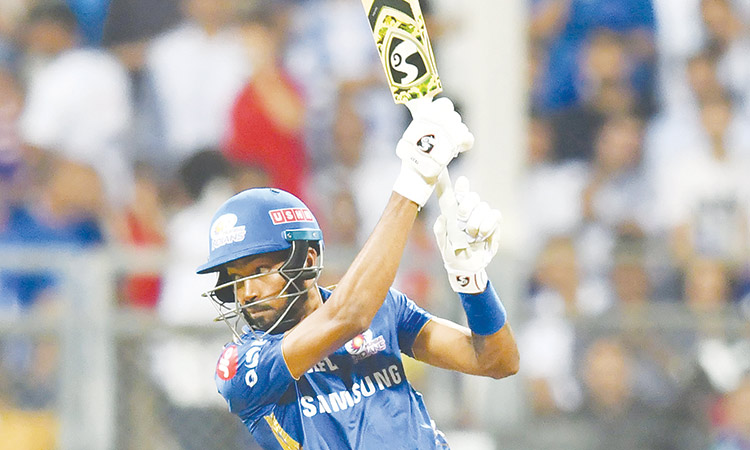 Mumbai Indians’ Hardik Pandya in action against Chennai Super Kings during their IPL match in Mumbai on Wednesday. Agence France-Presse

MUMBAI: Mumbai Indians (MI) finally became the first team to stop a marauding Chennai Super Kings (CSK) in their tracks as they beat MS Dhoni’s men by 37 runs to register their second win in four matches and go above Rajasthan Royals in the table. CSK meanwhile suffered their first defeat in four outings.

In reply to Mumbai’s 170/5, thanks to a 29-run last over blitzkrieg by Hardik Pandya and Kieron Pollard, CSK could only manage to score 133/8 in reply.

While Behrendorff returned figures of 2/22 off his 4 overs and Malinga (3/34 in 4 overs), Hardik was MI’s most outstanding bowler with 3 wickets while conceding just 20 runs off his 4 overs.

CSK had a stuttering start in their chase. Opener Ambati Rayadu was the first to go, caught behind by Quinton de Kock off the bowling of Australian quick Jason Behrendorff for a duck when the team’s score was 1. Five runs later, Shane Watson (5) was the next to go, caught by Pollard off Lasith Malinga’s bowling in the second ball of the second over. The third CSK man to fall was their star batsman Suresh Raina, also caught by Pollard off Behrendorff. CSK’s score at this stage at the end of the fifth over, was 33 for 3.

However, Kedar Jadhav and skipper MS Dhoni, then steadied the innings with a 55-ball 54-run partnership. However, Dhoni never got going and in the first ball of the 14th over, he was cramped up by a short one from Hardik Pandya and was caught by Suryakumar Yadav. Hardik struck again in the fourth ball of the same over by having Ravindra Jadeja caught behind for just one. The score at the fall of CSK’s fifth wicket was 89 with the required run rate well over 14.

Despite Jadhav going on to score a half century, it was going to be an uphill task for CSK, and when he departed, caught behind off Malinga’s bowling after scoring 58 (54; 8x4,1x6), it was all over bar the shouting for CSK.

Earlier,  despite a slow start, it was Hardik Pandya and Keiron Pollard’s quick-fire play, which propelled Mumbai Indians to 170/5.

While most Chennai bowlers maintained a tight economy rate in 18 overs, they went for too many runs in the last two overs. Pollard (17 unbeaten off 7) and Hardik (25 unbeaten off 8) hammered them all around the park to help their team post a fighting total.

Put to bat, the hosts were off to a slow start, before Deepak Chahar drew first blood for Chennai when de Kock handed an easy catch to Jadhav at square leg in the third over.

Rohit Sharma and Suryakumar then tried to repair the damage, adding 37 runs for the second wicket. But Ravindra Jadeja dismissed Sharma when on 13 as Mumbai were 45/2 in the eighth over.

With the addition of just five runs, Imran Tahir then send Yuvraj Singh back at 4.

Suryakumar and Krunal Pandya (42 off 32) then showed some resistance, stitching a 62-run stand, which Mohit Sharma finally broke by sending Krunal back in the 17th over.

Suryakumar tried to clear the fence off a Dwayne Bravo delivery, but ended up giving a catch to Jadeja at the long-on. It left the hosts at 125/5 in 17.6 overs.