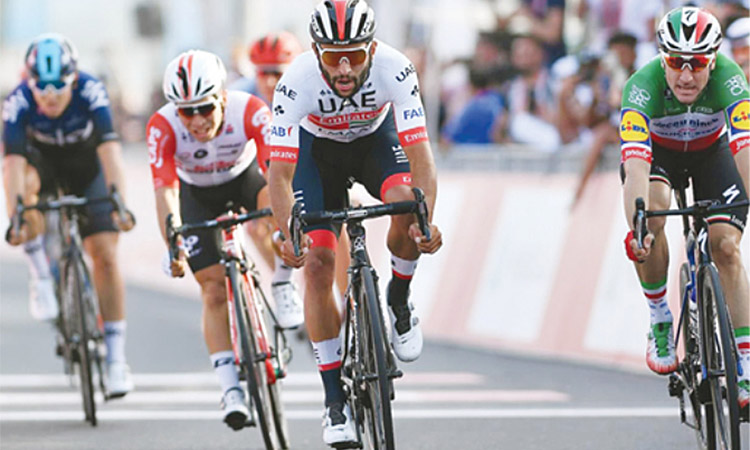 ABU DHABI: Fernando Gaviria and Alexander Kristoff will once again lead the UAE Team Emirates line-up as they take on the Dwars door Vlaanderen on Wednesday, hoping to buck the trend of Belgian winners that have dominated this race over the past four years.

The Norwegian will be hopeful of a repeat performance and will rely on the support of teammates Jasper Philipsen, Marco Marcato, Sven Erik Bystrom, Oliviero Troia and Norwegian National Champion, Vegard Stake Laengen.

With eleven hills and three cobbled sections to the race, the Dwars door Vlaanderen serves as a timely preparation for the Tour of Flanders taking part on Sunday.

The 183km route through the Flemish hills should start off at a steady pace, with riders having to wait until 80km before the first climb. Once they descend, the peloton will have 20km to gear up for the real test  - a relentless 80km of ascents and descents, some of which are on cobbled roads. If the recent races in Belgium are anything to by, we should be in for another nail-biting sprint to the finish.

Allan Peiper, the UAE Team Emirates Sports Director leading the team at Dwars door Vlaanderen said: “I think the Dwars door Vlaanderen is suited to the team’s strengths, and in particular, to Fernando Gaviria. It’s an intense race, but not that complicated like many of the other races in Belgium. So, we are going to focus on taking Fernando to the line to fight for his chance.”

UAE National Champion, Yousif Mirza returns to action following a successful ride at the Tour of Egypt where the Emirati picked up an impressive Stage win.

The Giro di Sicilia debuts on the UCI calendar in 2019 and provides spectators in Southern Italy a chance to get a taste of road racing ahead of the Giro d’Italia this May.

The four-stage race will play out across the hills of Sicily, with Stage one setting off from the town of Catania on the east coast of the island. With a relatively short 165km route ahead and just one significant climb, a bunched sprint finish is to be expected. Stage two will be a slightly different affair, with riders battling a hilly course and a difficult climb midway through the 236km race.

The par course could favour the breakaway, especially if they get to the final 30km with a large enough time gap from the chasing group. Stage three will be another tricky test for the riders, particularly in the final 40km with a difficult climb that peaks 20km from the finish line; it could provide the perfect opportunity for an attack. The final stage is where this race will likely be won - a mammoth summit finish at Mount Etna.