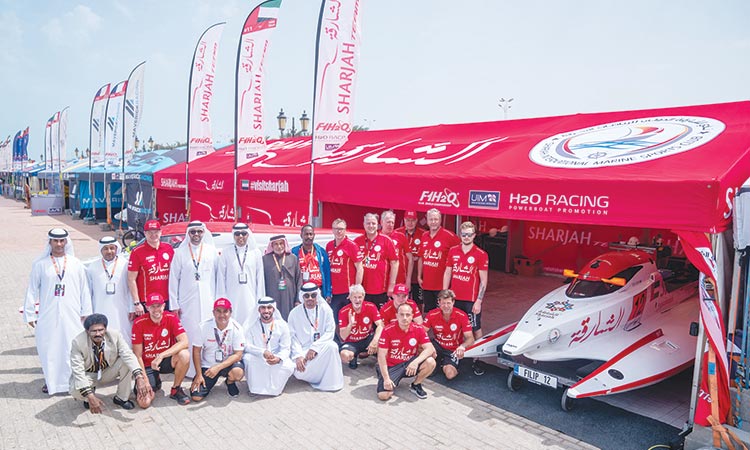 Khalid Jasim Al Midfa with the members of Sharjah Team at the Saudi Arabian Grand Prix in Dammam on Saturday.

Dammam: Khalid Jasim Al Midfa, Chairman of Sharjah Commerce and Tourism Development Authority and Vice Chairman of the Sharjah International Marine Sports Club (SIMSC), has stressed that the integration of sports, tourism and commercial initiatives in the Emirate is in line with the directives and vision of His Highness Dr Sheikh Sultan Bin Mohammed Al Qasimi, Supreme Council Member and Ruler of Sharjah, and is aimed at unleashing the Emirate’s tourism and economic potential.

“The Emirate has been the first in the region to invest in various sports, both individual and team sports, to tap the potential of individuals as well as the entire society, starting with children and young people as well as adults - both men and women. Sharjah today boasts a number of such clubs that cater to various segments of society all over the Emirate, which shows the importance accorded to sports in the Emirate as well as the growing interest of the people in sports actvities,” said Midfa.

Expressing delight over the SIMSC’s realisation of the dream to establish the Sharjah F1 powerboat team with the support and guidance of Sheikh Sultan Bin Mohammed Bin Sultan Al Qasimi, Crown Prince and Deputy Ruler of Sharjah, the SCTDA Chairman hoped that this would give further boost to watersports in the Emirate and attract more international and regional tourists to the Emirate.

He was speaking to the media on the sidelines of Sharjah Team’s participation at UIM F1 H2O World Championship’s season opener being held in Dammam, Saudi Arabia, from March 29 to 30.

Madfa pointed out that the formation and participation of the Sharjah Team in the world championship will achieve a number of strategic objectives that Sharjah is working on in a number of areas that complement the image of the Emirate.

Sharjah has been successfully organising and hosting the UIM F1H20 Sharjah Grand Prix for nearly two decades, establishing itself on the global sports map. The Sharjah Team is a key part of the Emirate’s ambitious plans to develop various sports in Sharjah, as well as use these activities to showcase Sharjah’s tourism potential and Emirate as a unique cultural and tourist destination, he added.

The SCTDA Chairman said: That a marketing and promotional plan is being developed in partnership with the organisers and promoters of the UIM F1 H2OWorld Championship as part of these efforts. The organisation of F1 H2O races in major cities around the world will enhance Sharjah’s profile on the global tourism map.”

Midfa added that this addition to Sharjah’s sports portfolio will provide a fillip to the objectives of the SCTDA in terms of promoting the Emirate as a diverse tourism and cultural destination.

Nicolo di San Germano, H2O Racing President said: “The formation of the Sharjah Team is a bold step by the Emirate, which already has extensive experience in organising such international championships and events.”

Germano praised the SIMSC for putting together a distinguished team of experienced professionals who will benefit the club’s various projects in terms of training national cadres.