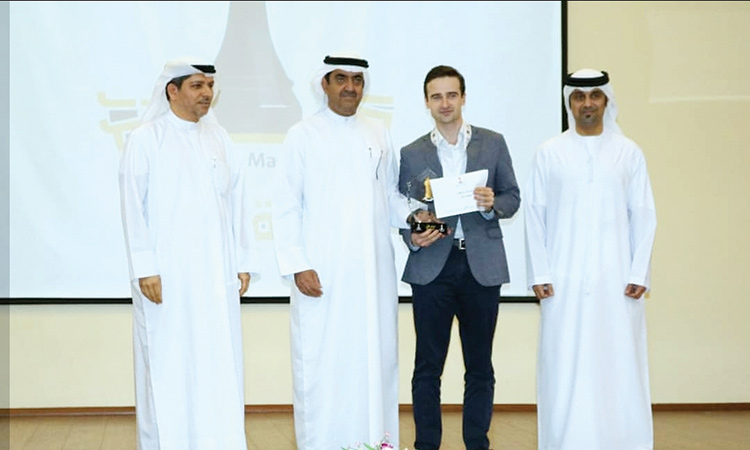 GM Ernesto Inarkiev poses with the dignitaries during the prize distribution ceremony.

Sharjah: GM Ernesto Inarkiev of Russia won by tie break over six other players to garner the top prize of $15,000 in the third Sharjah Masters International Chess Championship at the Sharjah Chess Club in Sharjah.

Finishing in a tie at seven points each were top seed Wang Hao of China, Yuriy Kryvoruchko of Ukraine, Allireza Firouzja of Iran, Maxim Matlakov of Russia, Nodirbek Yakubboev of Uazbekistan and Sandro Mareco of Argentina. Inarkiev won by Buccholz tie break followed by Wang for silver and Kryvoruchko for bronze.

Playing Black against compatriot GM Maxim Matlakov, Inarkiev survived attack and counter-attack to reach a drawn Rook and Pawn endgame in 60 moves. Inarkiev was formerly Kyrgyz champion in 1999 but switched in 2000 to Russia and now lives in Elista, Kalmyk Republic, Russia. He won the Russian junior championship in 2002.

Wang, the defending champion, and Kryvoruchko played a Ruy Lopez game for a quick 15-move draw to insure their podium finish.

Alireza used the Sicilian defense and won a Bishop on a blunder on the 16th move by IM Nguyen Anh Khoi of Vietnam who resigned on the 36th move.

Yakubboev smashed the Dutch Defense of Vladimir Fedoseev in 47 moves. The Uzbek castled on the opposite wing, broke through the center and penetrated with Queen and Rook to threaten mate.

Mareco used the King’s Indian Defense to win in 50 moves against Vishnu Prasanna of India in a Rook and minor piece endgame.

Five players follow with 6.5 points to share the $60,000 prize fund, namely Alan Pichot of Argentina, Ahmed Adly of Egypt, Parham Maghsoodloo of Iran, Sanan Sjugirov of Russia and Javokhir Sindarov of Uzbekistan. Also with 6.5 points but out of the prize money by tie break are child prodigy Nihal Sarin, 14,  and GA Stany, both of India.