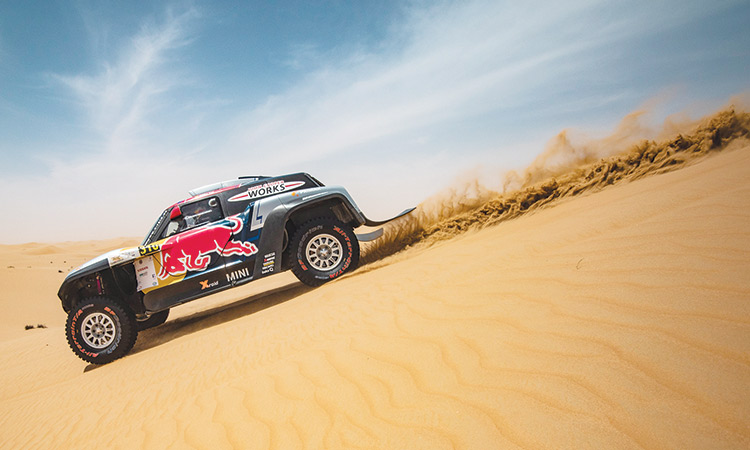 Cyril Despres in action on the opening day of Abu Dhabi Desert Challenge.

Abu Dhabi: Cyril Despres and Sam Sunderland emerged as the early pacesetters in the Abu Dhabi Desert Challenge (ADDC) powered by Nissan on Sudnay as a heavy sandstorm turned the opening leg into a battle for survival.

High winds churning up a wall of sand made visibility a constant problem as the 262km Yas Marina Circuit Stage wound its way through the dunes towards it conclusion at the bivouac, the rally’s desert base for the next four days on the fringe of the Rub Al Khali.

Partnered by Spain’s Daniel Oliveras in a Mini John Cooper Works Buggy, Frenchman Despres, five time a Desert Challenge bikes winner, made a positive start in pursuit of his first cars triumph at his second attempt on four wheels.

Chasing a sixth cars victory, eight years after his last and this time with wife and former rally star Andrea as co-driver, Stephane Peterhansel was just 1 min 58 secs further away in third in a Mini John Cooper Works Rally.

Sunderland, the 2017 Desert Challenge and Dakar Rally winner, produced a hugely impressive performance to lead by 6 mins 9 secs from Andrew Short, the Texan quickly making an impact in cross country rallying after a rock star career in American Supercross and Motocross.

“It was a day when we saw just how tough and demanding the Desert Challenge can be” said Mohammed Ben Sulayem, President of the Automobile and Touring Club of the UAE and FIA Vice President for Sport.

Reaching the end of the stage, Despres said: “It has been a long time since I started a stage with a storm and strong winds as we had here today. I could not see the crest of the dunes easily. It was challenging.