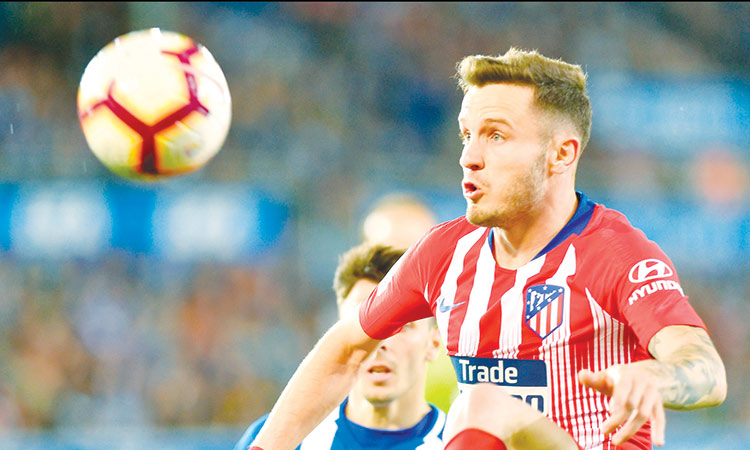 Madrid: Atletico Madrid thrashed Alaves 4-0 on Saturday to keep alive their faint hopes of winning the La Liga title as they stayed 10 points behind leaders Barcelona in second place in the standings.

Diego Simeone’s side dominated at Mendizorroza and triumphed with goals from Saul Niguez, Diego Costa, Alvaro Morata and Thomas Partey.

Costa’s strike was the pick of the bunch, a curling effort in off the far post from outside the area, until Thomas struck a sublime shot into the top corner from distance. Hosts Alaves, fifth in the table, spurned the chance to climb into the Champions League qualifying positions by overtaking fourth-placed Getafe, who earlier lost 2-0 to Leganes.

“Today we were excellent, tactically from the start we were superb, we were on our game,” Saul said. “We have to fight, that’s all there is to it.

After Champions League elimination by Juventus and defeat by Athletic Bilbao last weekend, Atletico were back to their ruthless best.

Saul drilled home the opener at the near post in the fifth minute after Antoine Griezmann found him on the left of the box.

Valencia maintained their hopes of a place in next season’s Champions League after Daniel Parejo’s penalty on the stroke of half-time gave them a vital 1-0 victory at Sevilla on Sunday.

Parejo’s spot-kick, which came after Ever Banega brought down Jose Gaya, extended Valencia’s unbeaten run to nine matches and moves them up to sixth, level on 43 points with Sevilla and just three back from the final Champions League spot.

That place is occupied by Getafe, who fell 2-0 at home to mid-table Leganes on Saturday and have to play the league’s top three -- leaders Barcelona, Atletico Madrid and Real Madrid -- and Sevilla in their final nine games.

Meanwhile, in the other early matches on Sunday, Levante and Eibar played a 2-2 draw while Rayo Vallecano held Betis 1-1.