City back on top, Huddersfield equal record for earliest relegation 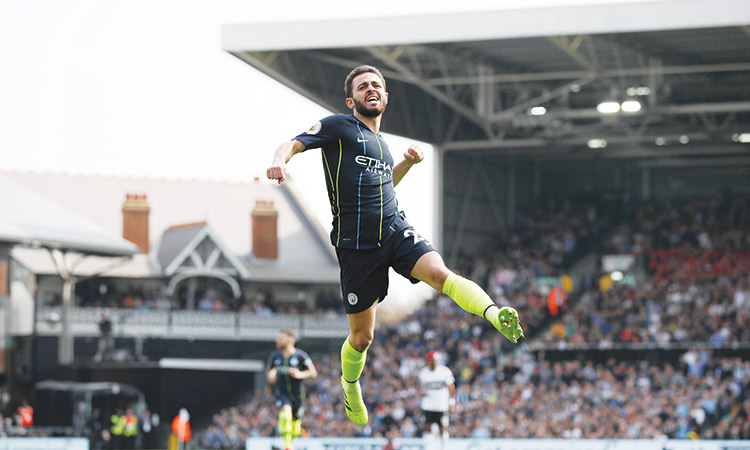 Manchester City’s Bernardo Silva celebrates after scoring against Fulham during their EPL game on Saturday. Reuters

London: Manchester City swept back to the top of the table with a stylish 2-0 win at Fulham, while Huddersfield equalled the record for the earliest Premier League relegation after a 2-0 defeat at Crystal Palace on Saturday.

Amid the drama at the top and bottom, Manchester United celebrated Ole Gunnar Solskjaer’s first match as permanent manager with a 2-1 win over Watford to climb into fourth place.

Bernardo Silva’s fifth minute strike from the edge of the area was followed by Sergio Aguero’s cool finish as City effectively wrapped up the points in the first 27 minutes.

City lead Liverpool by one point with seven games remaining for both sides, but Jurgen Klopp’s men can regain pole position with victory over third-placed Tottenham at Anfield on Sunday.

Pep Guardiola’s side remain on course for an unprecedented quadruple of Premier League, Champions League, FA Cup and League Cup, which they retained last month.

A potential 14 games now stand between them and history, but there will be far tougher tests in wait than struggling Fulham, who are 16 points adrift of safety with just six games left.

“The way we started was amazing. They surprised me again, the first 15-20 minutes was exceptional,” Guardiola said.

“Every game we have to win if we want to be champions. We have tough opponents, but that is the challenge.”

Bottom of the table Huddersfield’s two-season stay in the top-flight came to an end at Selhurst Park as they slumped to a 24th defeat in 32 league games.

Huddersfield are only the second club to be relegated from the Premier League in March after Derby went down with 11 points in 2008.

They survived just one day longer than Derby in 2008 and equalled their unwanted Premier League record of relegation after 32 games. Luka Milivojevic’s 76th minute penalty put Huddersfield behind after a foul on Palace winger Wilfried Zaha.

At Old Trafford, Solskjaer received a rapturous reception from the crowd when he strolled down the touchline just before kick-off, days after agreeing a three-year contract following his successful spell as interim boss.

After Watford dominated the early stages, Solskjaer was applauding a lethal United counter-attack to open the scoring through Marcus Rashford in the 28th minute.

Luke Shaw unfurled a superb pass from deep in his own half and Rashford sprinted clear to clip a deft finish over Watford keeper Ben Foster for his 13th goal of the season. After successive defeats against Arsenal and Wolves before the international break, Anthony Martial ensured United got back on track when he bundled home in the 72nd minute despite Watford’s appeals for offside.

Abdoulaye Doucoure scored for Watford in the 90th minute, but United are level on points with Tottenham and one point above fifth placed Arsenal, who host Newcastle on Monday.