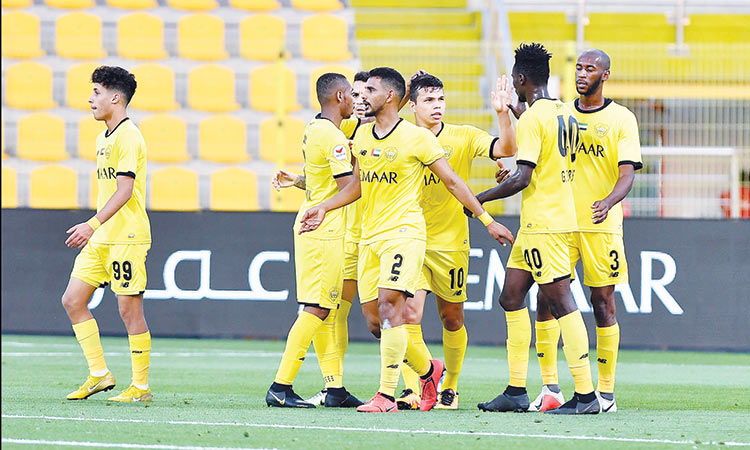 Al Wasl players celebrate after their win over Al Dhafra in an AGL matchweek 18 game at the Zabeel Stadium on Saturday. Supplied photo

Al Ain: Al Ain kept their title hopes alive as they prevailed over a determined Fujairah 2-1 in a matchweek 18 game of the Arabian Gulf League at the Hazza Bin Zayed Stadium in Al Ain on Saturday.

With this, their 12th win, Al Ain have notched up 38 points to occupy sole second spot on the table.

After Tsuksa Shiotani opened the scoring for the Boss in the 14th minute, Ruben Ribeiro made it 2-0 in the59th minute. Ibrahim Khameis scored a consolation goal for Fujairah in the 77th minute of the game that ended finally at 2-1 in Al Ain’s favour.

Dibba found the back of the net three minutes after the half-hour mark, thanks to Yaseen Al Bakhit. An inch-perfect cross from Ahmed Ibrahim found Diogo Acosta inside the box and the latter passed the ball to the Jordanian midfielder who slotted home.

After assisting Bakhit’s opener, Diogo Acosta got his name into the scoresheet three minutes before the break.

The Sailors were awarded a penalty after Amir Mubarak fouled Bakhit inside the box and the Brazilian forward converted into the bottom left corner of the net to double his side’s lead.

As Dibba looked to be taking a 2-0 lead into halftime, Al Nasr were able to half the deficit through Junior Dutra.

The Brazilian forward found the ball following a defense-splitting through pass inside the box before sending a powerful shot into the left corner of the net, leaving the goalkeeper helpless. The match ended 2-1 in Dibba’s favour.

Despite the victory, Dibba remain at the bottom of the table, but raised their points tally to eight. Meanwhile, Al Nasr lost their ninth game this season to remain 11th on 17 points.

Al Wasl meanwhile, scored twice in the first half to snatch an important 2-1 victory over Al Dhafra at Zabeel Stadium on Saturday.

Al Wasl broke the deadlock in the 23rd minute. Caio Correa received the ball up the left flank and cut inside, before sending the ball towards Ali Saleh, who slotted calmly into the bottom corner, making it 1-0 for the Cheetahs.

The hosts kept pushing forward in order to extend their lead and in the 34th minute they doubled the scoreline through Fabio De Lima. The Brazilian finished Vinicius’ in-swinging crossed freekick into the top corner with an accurately-placed flying header.

Khalid Bawazir pulled one back for Al Dhafra just six minutes ahead of the final whistle, when he dribbled skillfully past Al Wasl’s defender and drilled the ball into the back of the net. Bawazir’s goal wasn’t enough to save his side as they suffered their first defeat after five consecutive victories.

After the game, Al Dhafra and Al Wasl occupy the seventh and ninth spots, respectively, tied on 23 points.

While Hertog backs his players to learn from their mistakes, he was satisfied with the team’s work ethic.

“It was a very exciting match as there were a lot of chances and goals,” said Hertog during the post-match press conference.

“The result was not good for us though. We made some mistakes which saw us concede the goals. But mistakes happen and this was not to do with our game strategy. I was pleased with how we got back into the game as well as creating a number of chances.”

He added: “We dominated the game with possession and kept Sharjah’s attackers, who are very skilful, relatively quiet. We knew we had to be at the top of our game against Sharjah and we were as a team as I cannot fault the efforts of the team performance. But am sure the players will learn from their mistakes in time for the next game.”