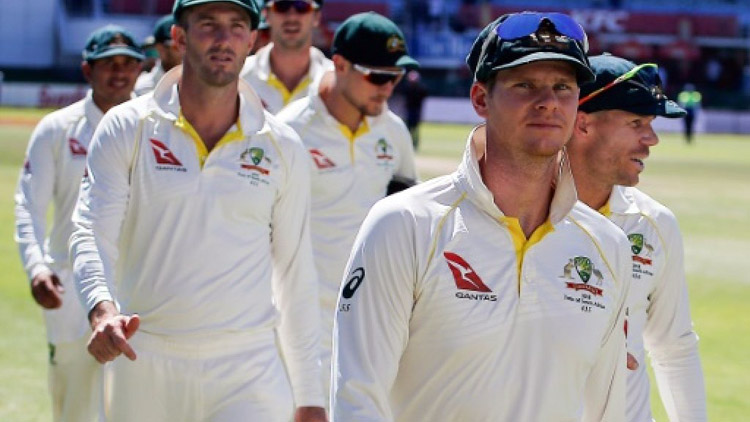 Steve Smith and David Warner have served one-year bans for their part in the scandal dubbed Sandpaper-gate. File photo/ AFP

SYDNEY: Australian cricket chief Kevin Roberts insisted the return of Steve Smith and David Warner will not disrupt the resurgent team as a report on Friday revealed senior players threatened a boycott in the wake of the ball-tampering scandal.

One-year bans slapped on the former captain and his deputy for their part in the scandal dubbed “Sandpaper-gate” expired overnight and the pair are free to play at state and international level again.

Warner was widely seen as the instigator of the plot during the third Test in Cape Town last year to use sandpaper to alter the ball, with rookie opener Cameron Bancroft carrying it out and Smith turning a blind eye.

The Sydney Morning Herald reported on Friday that star bowlers Mitchell Starc, Josh Hazlewood, Pat Cummins and Nathan Lyon all intended to pull out of the fourth Test in South Africa if Warner was not removed from the team.

Citing multiple sources, it said “the revelation highlights the extent of the fracture within the dressing-room in the immediate aftermath of one of the most damaging events in Australian cricket history.”

Smith and Warner’s reintegration process has already begun with the pair meeting the one-day team in Dubai this month. Lyon and Cummins were present, but the injured Starc and Hazlewood were not.

Asked whether relations had been patched up sufficiently for Warner’s return not to be disruptive, Roberts compared the situation to any other workplace.

“What we’re focused on is doing everything we can to support Dave, Steve, Cameron and all of the other support staff with this integration... to build harmony rather than to disrupt the harmony that is building,” he said at the Melbourne Press Club on Thursday.

“At the same time, let’s be open about it — in any workplace you don’t need to be best mates with everyone, but there needs to be a foundation of respect and I think there is growing respect there.”

He added that Smith, Warner, and Bancroft had all “owned their mistakes, they’ve paid a price and have served their time.”

Then-coach Darren Lehmann quit and all the top brass from Cricket Australia left after a scathing review said their “arrogant and controlling” win-at-all-costs culture was partly to blame for players bending the rules.

Reflecting on the past year, Roberts said “our highest priority now is rebuilding trust both within and around cricket.”

“We’ve seen tangible change at the board level, the executive level, we’ve got a new men’s coach and a relatively new men’s Test captain.

“Those are some of the tangible changes. But much more importantly the really important intangible change is that we are now very clear about what we stand for.

“Everything we do now at Cricket Australia is about uniting and inspiring communities through cricket.”

He added that while Australian teams were determined to win, “we have a non-negotiable expectation that we compete with respect.”

While it has been assumed that Smith and Warner will waltz back in for the World Cup, the team’s form in recent weeks has given selectors a major headache.

Australia’s win over Pakistan on Wednesday was their sixth-straight one-day victory, sealing back-to-back series wins abroad for the first time since 2016 after also beating India.

Skipper Aaron Finch, Usman Khawaja, Shaun Marsh, Peter Handscomb and Glenn Maxwell have all been in good nick at the top of the order.

“It is bloody hard,” Finch admitted of World Cup selection. “Especially when the side is playing so well, it’s going to be difficult.

“At the end of the day, they’re the selectors and it’s an incredibly tough decision.”