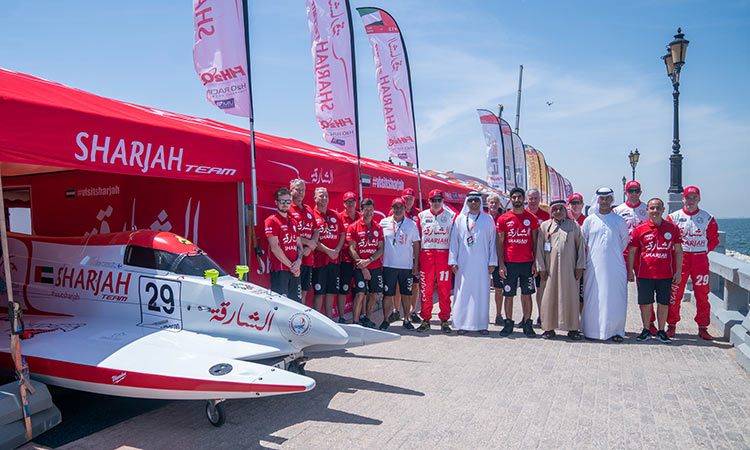 Members of SIMSC Board and Sharjah Team pose for a picture at the Saudi Arabian Grand Prix in Dammam on Friday. Supplied photo

DAMMAM: With the launching of the new F1 powerboat team, Sharjah International Marine Sports Club (SIMSC) is looking to get increasingly involved in watersport activities and wants to use this oppourtunity as a launchpad to train Emiratis.

By the end of 2019, the SIMSC will open the Sharjah Marine Academy in Al Khan. The plan has already been approved by the Sharjah government. Besides the academy, the SIMSC also has plans to open training facilities in Dibba Al Hosn, Khorfakkan and Kalba.

Sharjah has a longstanding and very successful association with the UIM F1H2O World Championship, hosting its first Grand Prix on the iconic Khalid Lagoon in the heart of the city in 2000 and since 2004 has become the showpiece for the traditional end-of-season finale.

Speaking to Gulf Today, Ahmed Eisa Al Hosani, executive manager of the Sharjah International Marine and Sports Club, said, “After making an entry into the UIM F1H20 Championship with a new team, the club will open an academy to attract and give chance to local talent. The academy will train Emiratis who are interested in motorsport.

“We also have plans to launch training facilities in different parts of the Sharjah which enable the local talent to sharpen their skills.

“While signing two-time world champion Sami Selio, we also discussed the plans with him to impart training to local talent. The objective behind the whole process is to give the opportunity to Emirati participants in powerboat racing and Jet Ski racing and to help them to step up and compete internationally,” he added.

Selio, who signed a multi-year co-operation agreement with SIMSC, already have two academies which train the young drivers. His academies are based in Finland and Portugal.

Sharjah Team also looking forward to manufacture their own boats for the races.

For the second day in a row, strong winds of over 30km/h and rough seas have disrupted any on-water activity at this week’s Grand Prix of Saudi Arabia, with race officials confirming that Friday’s official qualifying is postponed. “It is a very frustrating situation we are facing but our ultimate responsibility is the safety of the drivers. We expect the conditions to calm over the next 24hrs and we are provisionally looking to reschedule qualifying to tomorrow.” said Luis Ribeiro, UIM Race Director.