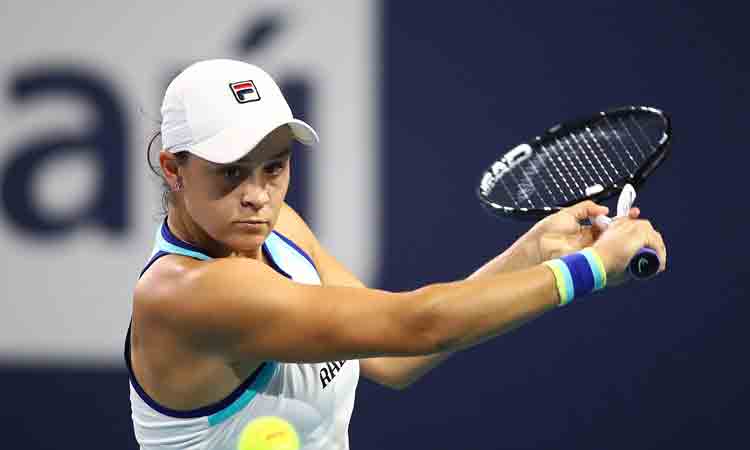 MIAMI GARDENS:  Ashleigh Barty walked away from Tennis about five years ago, saying she was basically burned out at 17.

She returned three years ago.

Next up in the biggest final of her singles career: Either second-seeded Simona Halep or fifth-seeded Karolina Pliskova, who were scheduled to play late Thursday night.

"Obviously, I've been doing the right things throughout the week to put be able to put myself in a position to play for a title," Barty said. "You have to go out there and embrace it."

That was also her approach to a very long - and very wet - day at Hard Rock Stadium.

Barty, who will rise to a career-best No. 9 in the world ranking next week, was to take the court for the semifinal against Kontaveit at 1 p.m. They didn't begin play until 2:08, and the delays were just getting started.

They got three games - six minutes of Tennis - in before the first in-match delay stopped things for more than two hours. They got another game in before more rain arrived, prompting another two-hour delay.

At 7:32 p.m., finally, it ended. Kontaveit fended off one match point with a forehand drop shot, but was ousted by an ace on the following point. Barty was down 3-1 in the second, but won the final five games.

"Very long day," said Barty, who passed the time in the locker room by drinking coffee and watching golf. "But for me, it's an opportunity to come out and play another match. We can't control the weather."

Barty has already beaten both Halep and Pliskova in her career - but given the seeds and the respective rankings, she won't be the favorite come Saturday.

And she's fine with that.

"I can go in there and play with freedom and try to play my best Tennis," Barty said.