Messi to start with Venezuela friendly on Argentina return - GulfToday

Messi to start with Venezuela friendly on Argentina return 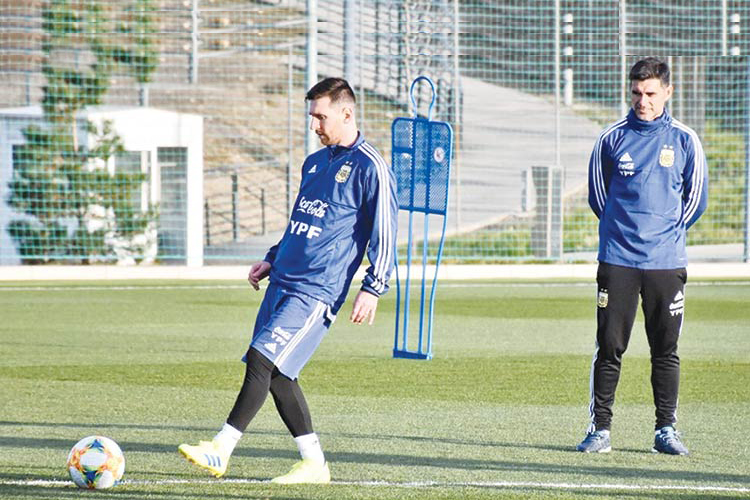 Argentina coach Lionel Scaloni confirmed that Lionel Messi would line up in attack in the friendly against Venezuela. Supplied photo

Scaloni said that Messi would line up alongside Inter Milan forward Lautaro Martinez and Atlanta United’s Gonzalo Martinez in attack as he revealed his full starting team.

“It’s a joy for me and for everyone that he’s back,” Scaloni told a news conference on Thursday.

“Now what remains is try and get the team to play along with him and get the best out of him. We’re all very happy that he’s back.

“It is the others who have to take that step so that Argentina can return to the level it had,” added Scaloni, who replaced Jorge Sampaoli as coach following the last-16 defeat by France at the 2018 World Cup.

Messi has missed six friendlies since the tournament in Russia but many believe he will be an essential part of the team that travels to Brazil for the Copa America, which kicks off June 14.

“We have a way of playing and feeling football in these six games we’ve had. We’re not going to change it, that (Messi) is coming is more incentive for us and another addition.

“We’ve played different systems and we’re going to do it in the same way, added to his great quality,” Scaloni added.

Scaloni refused to be drawn on whether Messi would also travel with the squad for next week’s friendly against Morocco in Tangier, but said he would not risk the Barcelona forward’s fitness.

The news that Messi would be involved for the game at Atletico Madrid’s Wanda Metropolitano ground pleased Venezuela coach Rafael Dudamel.

“The presence of the best player in the world lifts the game’s expectation,” Dudamel said.