President Weah on trip down memory lane with Al Jazirale 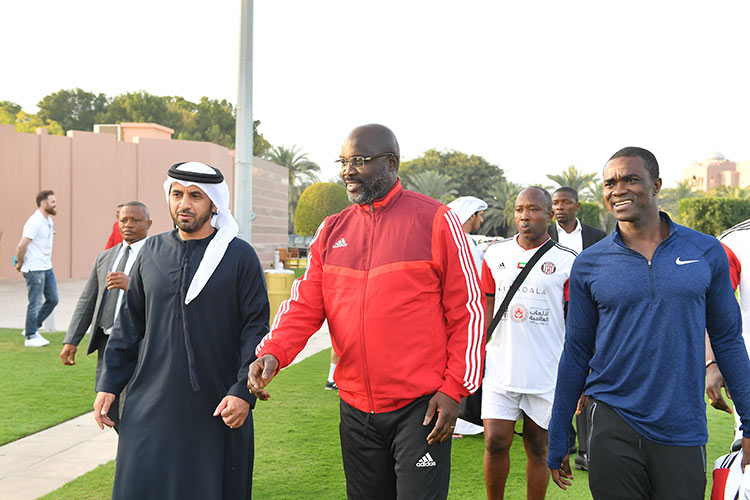 Abu Dhabi: George Weah, the President of Liberia and former footballer was back in the famous colours of Al Jazira Club on Wednesday when he visited the training ground at Emirates Palace in Abu Dhabi during his official visit to the UAE.

The former Ballon d’Or winner and Champions League top scorer expressed how delighted he was to be back at Al Jazira, how much his time at the club meant to him and how much he enjoys coming back to Abu Dhabi.

President Weah met up with his ex-teammate Ayed Mabkhout Al Hajeri, CEO of Al Jazira Club, who played alongside him in 2002-2003, and enjoyed a quick game with Al Jazira players during the training session.

President Weah, who enjoyed hugely successful spells at Monaco and AC Milan before finishing his career in the UAE capital rolled back the years as he joined in training with the Al Jazira team.

Montenegro-based Zakaria Alharaish scored after six and 69 minutes in a match moved from Libya to Ben Guerdane in neighbouring Tunisia for security reasons.

The teams meet again on Monday in Asaba with Nigeria, the 1996 Atlanta Olympics champions, seeking to avoid a shock early exit.

The Democratic Republic of Congo built a 2-0 home lead over Morocco in Kinshasa thanks to Jackson Muleka.

Sudan were another country to build a 2-0 first-leg lead at home, against highly rated Kenya in Omdurman, with in-form Waleed Bakhet bagging a brace.

He struck after 33 and 60 minutes, leaving Kenya needing to score at least twice in Nairobi when the teams meet again on Tuesday.

Guinea edged Senegal 2-1 in a showdown between western African neighbours with Morlaye Sylla snatching the winning goal three minutes into the second half in Conakry.