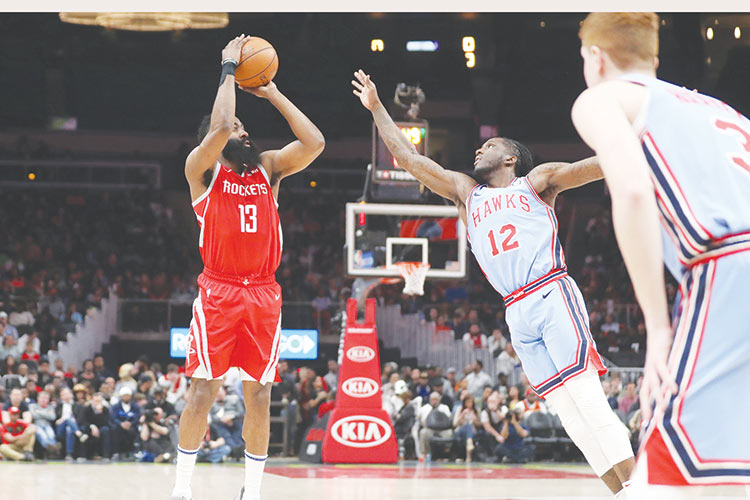 Houston Rockets’ James Harden (13) in action against Atlanta Hawks during their NBA game at State Farm Arena in Atlanta on Tuesday. Reuters

Los Angeles: Houston Rockets star James Harden carved a piece of NBA history on Tuesday after a 31-point haul against the Atlanta Hawks made him the first player to score at least 30 points against every team in the league in the same season.

The 29-year-old reigning NBA MVP’s points milestone came in a dominant 121-105 road win over the Hawks.

The win allowed the Rockets to keep up the pressure on Golden State and second-placed Denver as the Hawks slumped to their 48th defeat of the season.

Harden had 10 assists and eight rebounds to go with his points tally as the Rockets starters assumed total control.

Clint Capela added 26 points while Chris Paul had 13 points and 11 assists. Danuel House Jr. added a further 19 points from the bench for Houston.

Atlanta’s scoring was led by Trae Young with 21 points, 12 assists and four rebounds.

Houston’s win keeps them in third spot in the West, with 45 wins and 26 defeats.

The Warriors meanwhile bounced back from their loss to San Antonio on Monday with an emphatic 117-107 blowout of the Minnesota Timberwolves.

Stephen Curry and Klay Thompson carried the offensive burden for the Warriors, with Curry draining 36 points and Thompson 28.

Kevin Durant had 17 points while Swedish veteran Jonas Jerebko put up 18 points from 18 minutes on the court.

Curry did most of the damage in a devastating third quarter display which saw him run up 22 points, which prompted the Warriors star to perform one of his trademark shimmies in celebration.

The Warriors continue to lead the Western Conference from Denver with 48 wins and 22 losses.

The performance of the night came in Sacramento, where the Kings blew a 28-point lead as the Brooklyn Nets came back to win 123-121.

The architect of the comeback was Nets guard D’Angelo Russell, who delivered a 44-point display to fire the Nets.

The Bucks shrugged off Antetokounmpo’s absence to post a comfortable 115-101 victory as the Lakers already slim chance of reaching the playoffs grew even more remote.

While the Bucks are cruising towards the postseason with a 52-18 record to sit on top of the Eastern Conference, the Lakers remain out of playoff contention, in 11th place in the West on 31-39.

In Charlotte meanwhile the Philadelphia 76ers squeezed past the Hornets by 118-114 to stay in third place in the East.