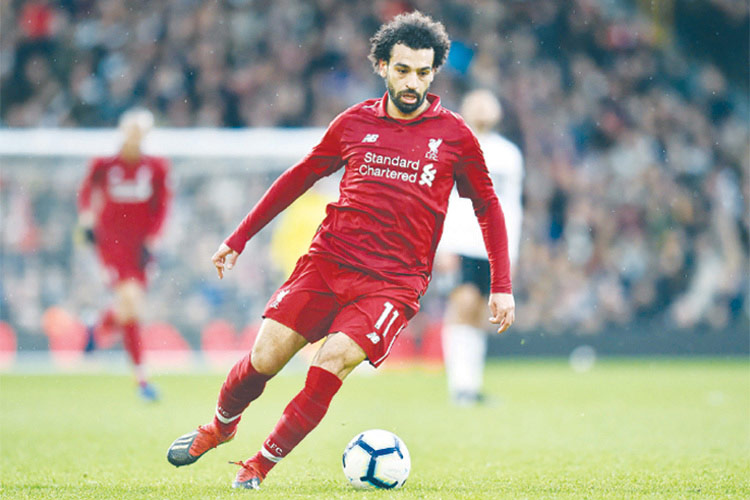 Mohamed Salah has failed to score in seven consecutive Liverpool games but team mate Virgil van Dijk says it is only a matter of time before the goals come for the Egyptian forward.

Salah, who scored 44 goals for Liverpool last season and helped them reach the Champions League final, has notched 20 goals in 41 games in all competitions, with 17 of them coming in the league.

“People can say all they want but I think all the teams in the Premier League would love to have him in their side,” defender Van Dijk told the club website.

“The goals will come. That’s something for a striker that is maybe going to be in your head but we tell him every time: you just need to keep working, keep going and you will be fine.”

Elsewhere, Manchester United’s former players from the famous Class of 92 are critical of midfielder Paul Pogba because he was not loyal to former manager Alex Ferguson, Zlatan Ibrahimovic has said.

Pogba, who came through United’s academy, left the club for free in 2012 after Ferguson fell out with the Frenchman’s agent Mino Raiola but returned following a four-year spell at Juventus for a then-world record fee in 2016.

The 26-year-old was criticised for his poor form earlier this season by former players Gary Neville and Paul Scholes, who work as television pundits, and Ibrahimovic said it stemmed from Pogba’s decision to leave United and Ferguson for Juventus.

“With Pogba, he was with United when he was young, then he went out and he came back,” Ibrahimovic, who played with Pogba at United for 1-1/2 seasons, told the Mirror.

“In the circle of Ferguson, they don’t like that because they stayed all their life under Ferguson and they never moved from Ferguson.

“They didn’t even talk if Ferguson didn’t tell them to open their mouth. So now if they’re talking, I don’t know whether Ferguson gave them permission or not.”

Despite playing a crucial role in winning the World Cup with France last year, Pogba struggled for form at United this season under former manager Jose Mourinho, who benched the midfielder towards the end of his Old Trafford tenure.

However, Pogba turned his campaign around with nine goals and seven assists in all competitions after Ole Gunnar Solskjaer was appointed caretaker boss in December.

“I think Pogba has the potential to be the best player in the world in his position,” Ibrahimovic, now with MLS side LA Galaxy, added.

“Things happening outside do not really bother him because when you are at that level, everyone will speak — positive, negative, in between.”

Meanwhile, Chelsea forward Tammy Abraham, on loan at Aston Villa, believes he will play regularly for the first team next season when he returns to his parent club.

Abraham is on loan at the second-tier Championship club until the end of the season and he is their leading goal scorer with 21 league goals, three behind the division’s top marksman Teemu Pukki of Norwich City.

The 21-year-old, who has also had loan spells at Bristol City and Swansea City, has made two Premier League appearances for Chelsea - the same number of international caps he has for England - and is aiming to significantly add to that tally.

“That’s the aim going into next season,” Abraham added. “I think I have the ability to. I just have to, when I get the opportunity, grab it with two hands.”

Sixth-placed Villa are vying for promotion to the top flight through a Championship playoff spot with eight games to go and host Blackburn Rovers on March 30.