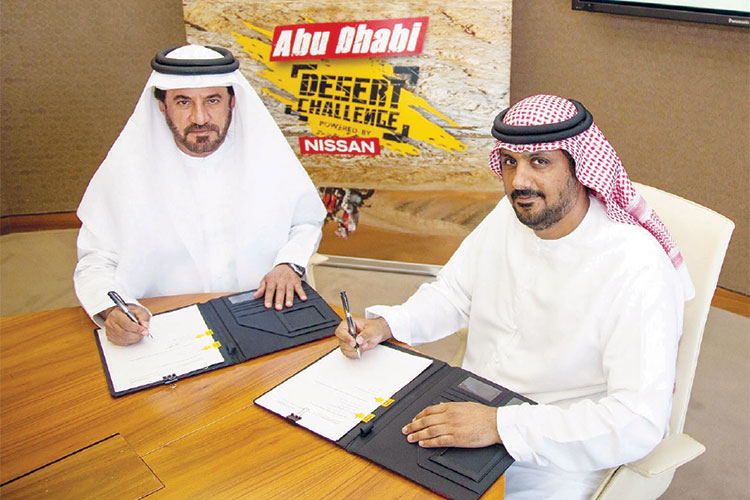 Yas Marina Circuit is laying on a big welcome for the world’s top cross country rally drivers and riders as Poland’s Jakub Przygonski prepares to tackle a huge test in the 29th Abu Dhabi Desert Challenge powered by Nissan.

The home of Formula 1 racing in the UAE capital is fully geared up for the return of an event which forms the second round of the 2019 FIA World Cup for Cross Country Rallies for cars and buggies and the opening round of this year’s FIM Cross-Country Rallies World Championship.

Przygonski, runner-up to Czech driver Martin Prokop in last year’s Desert Challenge, is attempting to clinch back-to-back victories in the UAE after winning the Dubai International Baja for the second year in a row last week alongside German co-driver Timo Gottschalk in a Mini John Cooper Works Buggy.

But with a procession of the world’s other top drivers and cross country rally machinery heading for Yas Marina Circuit, the event’s official head quarters, the defending FIA world champion faces a daunting examination when the rally breaks out over the majestic dunes and salt flats of the spectacular Al Dafrah region.

Among his rivals will be two of the top three in this year’s World Cup standings after the opening round in Qatar, Saudi Arabia’s Yazeed Alrajhi and Russia’s two-times Desert Challenge winner Vladimir Vasilyev, as well as defending champion Prokop.

The Automobile and Touring Club of the UAE (ATCUAE), the rally organisers, and Abu Dhabi Motorsports Management (ADMM), join forces again to provide a spectacular reception for competitors, teams, official and media from around the world.

“The beauty of the Desert Challenge is that it continues to set the standard for cross country rallying, adding enormous strength and depth to our motor sport calendar,” said Al Tareq Al Ameri, CEO of Yas Marina Circuit.

“This is why we are particularly enthusiastic about the long-term partnership we have with the ATCUAE, and we’re committed to working with the national motor sport authority to ensure the rally continues to go from strength to strength in the years ahead.”

Mohammed Ben Sulayem, President of the ATCUAE and FIA Vice President for Sport, said: “Having Yas Marina Circuit as our rally HQ gives the event an extra dimension in view of the world-class facilities that we’re able to offer.

“Around the world this event is known as the leading international cross country rally, and we are very grateful to have the continued support of ADMM for its ongoing development.”

A powerful assembly of rally cars, buggies, bikes and quads contesting the event begin arriving at Yas Marina Circuit late next week ahead of the ceremonial start at 7.30pm on March 30.

The following morning the rally heads out from Abu Dhabi for the first of five demanding desert stages in the Al Dafrah Region. For five nights the 800-strong contingent of competitors, technicians, officials, medical staff, volunteers and media will be encamped at a purpose-built bivouac close to the Qasr Al-Sarab Desert Resort by Anantara, before the event finishes at 5pm on April 4 back at Yas Marina Circuit which hosts the official prize giving the same evening.