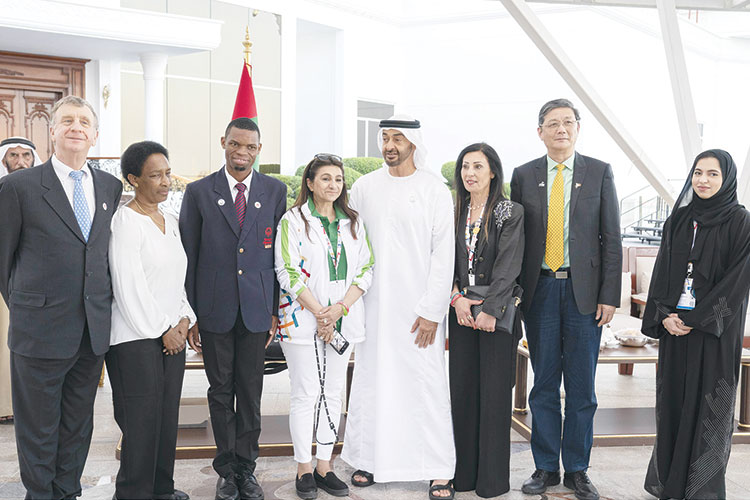 Sheikh Mohamed with the Special Olympics International Board of Directors in Abu Dhabi on Monday. WAM

Sheikh Mohamed wished full success for the Olympics Board of Directors to ensure entire support for the People of Determination and their integration in society.

He articulated the UAE’s keenness to empower People of Determination and facilitate their efficient contributions to the national and social development drive.

The Abu Dhabi Crown Prince hailed the efforts of the Kennedy’s family in promoting people of special needs’ sports and enable them to play an efficient role on the same footing with various segments of society.

For their part, the World Special Olympics delegation underlined the importance of the significant initiatives adopted by the UAE and its eminent role in providing an ideal environment and best-in-class facilities and services in line with international standards to ensure perfect engagement of people with special needs in such a global event.

The Special Olympics UAE football team continued their impressive winning streak by beating Korea in the team’s opening match of the second round of the 11-a-side competition.

The UAE put on a dominant display to win 3-0 in front of home fans at Zayed Sports City. After a goalless first half, Abdullah Peerak opened the scoring in the 48th minute, before doubling the lead in the 54th minute.

Khaled Al Mazmi scored a further two goals with the final goal of the game hitting the back of the net in the 55th minute.

It was the UAE’s third consecutive triumph in a row at the competition. The team previously beat Jamaica 4-1 and South Africa 4-0 in the first stage.

The sportsmen and women from the tiny Pacific Island nation made their presence felt after winning gold, silver and bronze in the shot put competitions at the Dubai Police Stadium.

Sixteen-year-old Judy Jubilee Moi won a gold medal, with Grace Dindillo, 22, taking a silver in her contest, and 26-year-old Jason Jubilee completing a hat-trick of honors for PNG with bronze.

One of the smallest countries and teams competing in the World Games, PNG sent just 15 athletes to the UAE to compete in football and athletics.

“In order for us to participate in the World Games it took us one whole year to get ready,” said Margaret, the assistant coach of PNG Special Olympics Team. “It was not easy, but our training schedule was three days a week of training for three to four hours a day. We had to really train hard.”