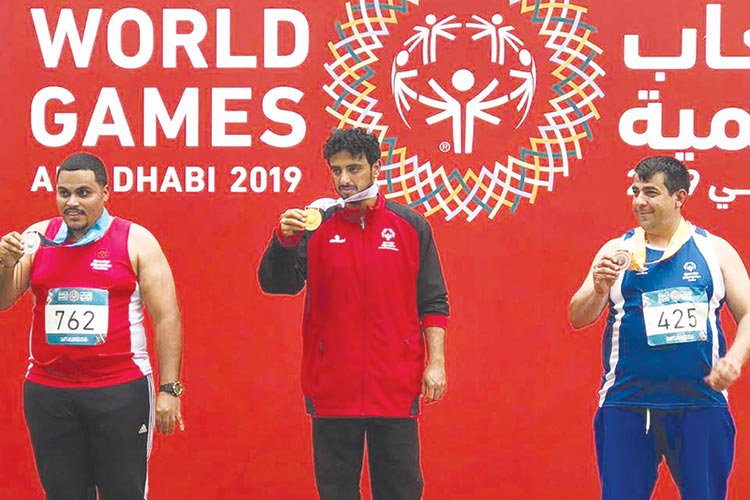 Abu Dhabi : It was all smiles for Khalid Al Hajeri as the Emirati won gold in the shot put competition at Special Olympics World Games Abu Dhabi 2019.

At Dubai Police Stadium, the 34-year-old registered an impressive distance of 10.98 metres which was enough to stand at the top of the podium. Alexander Almenas of Puerto Rico (10.31m) and Hellas’ Konstantinos Trigazis (9.68m) finished second and third respectively.

Hajeri said: “This is a proud moment for me as I have always dreamt of winning a gold medal for the UAE.

“I have honored my country by winning my competition, which was very difficult as there were some strong competitors. But I always felt confident and had high spirits and I’m so pleased to have won.

“The organisation of the World Games has been fantastic and I have really enjoyed the experience of meeting so many athletes from different nations,” he added.

Hajeri will be hoping to add to his medal collection when he competes in the 4x100m and long jump competitions later this week.

At Dubai Police Stadium, the 30-year-old sprinter crossed the finish line in an impressive time of 32.14 seconds. Canada’s Eva Bell who crossed the line at 34.81 seconds closely followed her.

There was more reason to celebrate for the UAE, with Hamda’s fellow Special Olympics UAE sprinter, Momena Shirdal, coming in third (36.42) during the same race and winning bronze.

The result comes as no surprise, with Hamda having dominated the track at various Special Olympic events.

Syeda, who lives in Karachi, explained how much the medal means to her and her family.

“It is a dream come true for me. I’m extremely happy to be a part of the Special Olympics World Games, especially after bagging the bronze medal.”

Syeda trained for two hours each day to prepare for the World Games, travelling two hours from her home to Karachi’s National Stadium to use the running facilities.

Her father, who took time off work to help his daughter prepare, said: “Syeda worked really hard and, with God’s help, her hard work paid off in the shape of a bronze medal.” The athlete said she hoped her performance so far at the World Games will lead to even more success on the running track in the coming days.

“I wish to win a couple more medals for Pakistan in the next few days of the Special Olympics,” said Syeda.

Her proud mother had an important message to parents who have children of determination.

“Do not ignore them, pay more attention to the determined ones and polish them just like a diamond merchant would polish a diamond because it will shine in the same way,” she said.

“If the parents of determined ones look after them and educate them, then they will shine and make their parents feel proud.”

A group of Special Olympic athletes had a day to remember as they trained alongside multiple Olympic gold medalist Allyson Felix in a Unified Sprint Clinic at Dubai Police Academy Stadium.

Allyson interacted with the Special Olympic athletes and shared her expertise as part of the Unified Experiences. The American, who also posed for pictures with the athletes, was thrilled to have passed on her knowledge to an aspiring group of people.

The track and field sprinter, said: “The athletes today were really determined. To have helped them was a real highlight and it leaves you inspired. Special Olympics is an important and significant platform for people to showcase their skills in sport.”