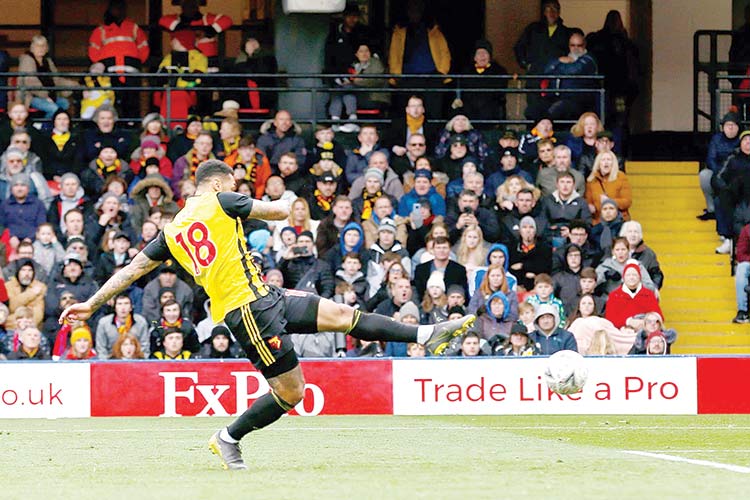 London: Andre Gray came off the bench to fire Watford into the FA Cup semi-finals with the late winner in their 2-1 victory over Crystal Palace on Saturday.

Javi Gracia’s side took the lead through Etienne Capoue’s first half strike before Michy Batshuayi equalised for Palace after the interval.

That was the signal for Gracia to turn to Gray, who maintained his reputation as Watford’s super-sub by grabbing the goal that avenged the Hornets’ 2016 FA Cup semi-final defeat against Palace.

The former Burnley striker has now scored the winner as a substitute three times in recent weeks, having also netted Watford’s decisive goal against Everton and Leicester.

Gray’s latest heroics moved Watford closer to finally returning to the FA Cup final 35 years after they lost to Everton in their only other appearance.

Watford had won both Premier League meetings with Palace this season and Gracia’s team went close early on when Gerard Deulofeu’s strike drew a good stop from Vicente Guaita.

Despite that save, Guaita looked nervous on a windy afternoon and the Spanish keeper made a hash of dealing with a Watford corner before Palace managed to clear.

It was a mistake he repeated with fatal consequences as Watford took the lead in the 27th minute.

Flapping at a Jose Holebas corner, Guaita’s weak punch failed to clear the danger and when the ball was diverted back to Capoue, the French midfielder slotted into the empty net from close-range.

Watford threatened a second goal when Deulofeu unleashed a rising shot moments later, but this time Guaita was up to the task.

Palace had laboured without Ivory Coast forward Wilfried Zaha, absent due to a calf strain, but they were more vibrant after the break and Heurelho Gomes had to keep out Max Meyer’s diving header before Batshuayi fired just wide.