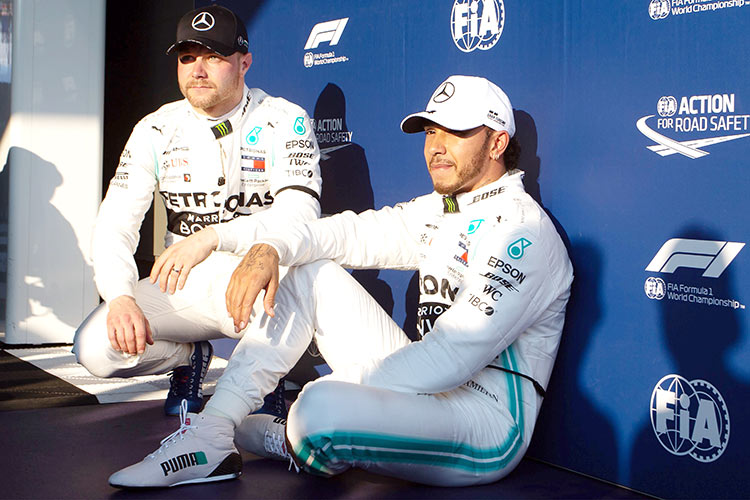 Melbourne: Mercedes’ world champion Lewis Hamilton picked up where he left off last year to reassert his authority and snatch a record-extending eighth pole position at the season-opening Australian Grand Prix on Saturday.

The Briton clocked a fastest lap of one minute 20.486 to narrowly pip team-mate Valtteri Bottas, with Ferrari’s Sebastian Vettel third, but a massive 0.704 seconds behind his arch-rival.

The German will start on the second row with Red Bull’s Max Verstappen while Ferrari newcomer Charles Leclerc and Haas’ Romain Grosjean make up row three.

Fellow Haas driver Kevin Magnussen is behind them alongside British young gun Lando Norris, who steered his McLaren to an admirable eighth in his debut qualifying session.

He knocked out his rivals with a blistering lap at the death to claim an 84th career grid-leading time and said afterwards he was “shaking, it was so close out there”.

Hamilton, who is bidding for a sixth world title to move within one of Michael Schumacher’s record seven, had complained after pre-season testing in Barcelona that Ferrari was much quicker.

But this has proved to be a fallacy with the Briton fastest in all three free practice sessions.

“Coming from Barcelona, we have made some really big steps in the past few days with the setup. And it seems to have worked,” he said.

“I really was not expecting to see the performance difference we have here.”

Bottas was equally stunned by their pace.

“Like Lewis I’m a little bit blown away by the performance we had today,” said the Finn. I don’t think anyone in the team could have imagined we’d be in this position after the testing we had.”

Mercedes and Hamilton have been dominant in Formula One in recent years, winning the drivers’ and constructors’ titles five years in a row and Ferrari -- and Vettel -- are desperate to catch up.

While the German won in Melbourne last year and backed it up with victory at the next race in Bahrain, Hamilton roared back to sweep 11 of the remaining 19 Grand Prix to comfortably be crowned champion.

Hamilton topped Q2 in 1:21:014 from Bottas and Verstappen, with Vettel running into the gravel at Turn 12, kicking up dirt and dust.