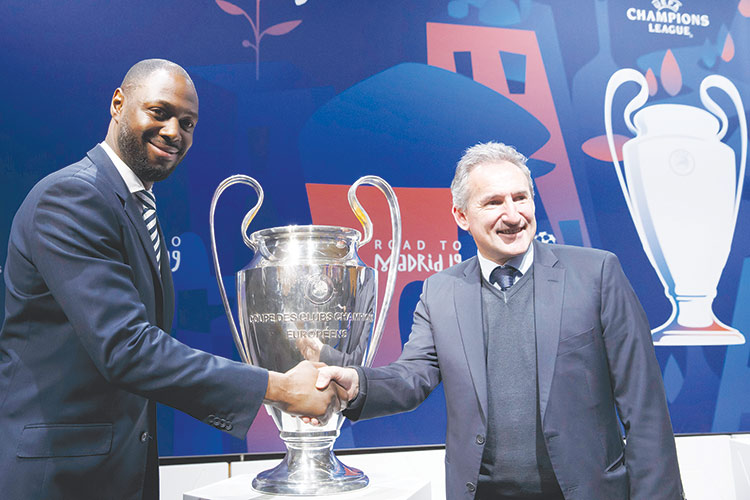 The second leg will take Solskjaer back to the Camp Nou, where in 1999 the Norwegian won United the Champions League by coming off the bench to score a stoppage-time winner against Bayern Munich.

With City and United not allowed to play their home leg in the same week, United will entertain the leaders of La Liga at Old Trafford on April 10, with the return six days later. Barcelona have not lost any of their last 30 home games in the competition, winning all but three of those.

United’s bitter rivals Liverpool will meet FC Porto in the knockout rounds for the second year in succession, while Ajax’s reward for eliminating the holders Real Madrid is a two-legged tie against Cristiano Ronaldo and Juventus.

English hopes are high that this could be their year in Europe after all four Premier League representatives made it to the last eight.

The last time England had four teams in the quarter-finals, in 2008/09, Barcelona beat the Old Trafford side 2-0 in the final in Rome. The clubs clashed again in the final at Wembley in 2011, with Barca winning 3-1 on that occasion. Messi scored in both finals.

“We are happy with United,” said Guillermo Amor, Barcelona’s director of institutional relations.

UEFA also drew the semi-finals on Friday, meaning the winners of the Barcelona vs United tie will face either Liverpool or Porto in the last four. That also means Messi and Ronaldo could only go head to head in the final. Jurgen Klopp’s side, fresh from knocking out Bayern Munich in the last 16, should be confident of beating the Portuguese champions after defeating them 5-0 on aggregate in the last 16 on their way to the final last season.

However, Klopp warned: “I could not be further away from thinking it’s the best draw because it isn’t. It is just the draw, it’s the opponent we have to prepare for and that’s all we will be thinking about from when we start preparing for the game.”

Liverpool will host two-time European Cup winners Porto at Anfield on April 9 in the first leg before heading to the Estadio do Dragao in the return on April 17.

There is guaranteed to be one English team in the semi-finals after Tottenham and City were paired together, with the first leg to be played in London on April 9 and the return eight days later.

With Pep Guardiola’s team top of the Premier League, 13 points ahead of Spurs in third, City will be the favourites to advance to their first semi-final since 2016. City have also won their last three meetings with Mauricio Pochettino’s team.

“We are confident. We are doing well, we are having a good season and we are in a good place now in the sense of the football that we are playing,” said City’s director of football, Txiki Begiristain.

The draw means there will be three clashes between the sides in 11 days — they are also due to meet in the Premier League at the Etihad Stadium on April 20.

The winner of the City-Spurs tie will host either Ajax or Juventus in the first leg of the semi-finals.

The latter tie is a repeat of the 1996 final, which the Italian club won on penalties against an Ajax team who had lifted the trophy the previous year.

Juventus have lost five finals since then but are hoping Ronaldo can fire them to glory this season after his hat-trick knocked out Atletico Madrid on Tuesday.