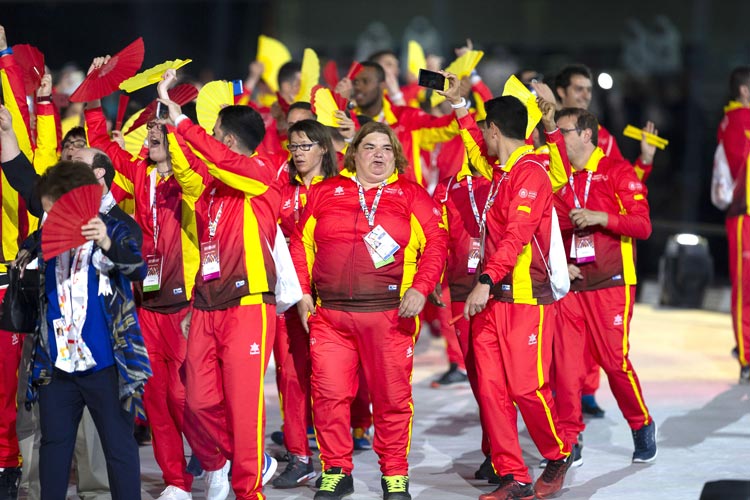 Athletes arrive for the opening cerening in Abu Dhbai. WAM

“Today, with your presence and participation, we send a message to the world that nothing is impossible when there is determination. Only a strong will can make a difference. A very warm greeting to all the people of determination for their strong will and determination to climb to the top. I also greet the athletes in the playground today for their bravery in representing their countries and for being a source of inspiration to everyone."

A general view of the opening ceremony at Zayed Sports City Stadium in Abu Dhabi. AFP

Emirati men and women perform during the opening ceremony.

Etihad Airways, official airline partner of the Special Olympics and national airline of the UAE, and the Al Fursan aerobatic stunt team performed a spectacular show in the sky to mark the opening ceremony of the World Games Abu Dhabi 2019.

Etihad’s flagship Airbus A380 performed a low-level flight above Zayed Sports City Stadium at 6pm on Thursday 14 March, in synchronisation with Al Fursan’s jets which produced a vivid smoke flume in the Special Olympics colours.

Hundreds of volunteers from Etihad Airways supported the opening ceremony and the airline’s Cabin Crew walked in the parade with the VIP dignitaries in attendance while Chief Commercial Officer Robin Kamark walked alongside Team Norway.

Etihad Airways has ferried athletes, equipment, coaches, dignitaries, and media to Abu Dhabi from all over the world for the event. The athletes are accompanied by 2,500 coaches and delegates.