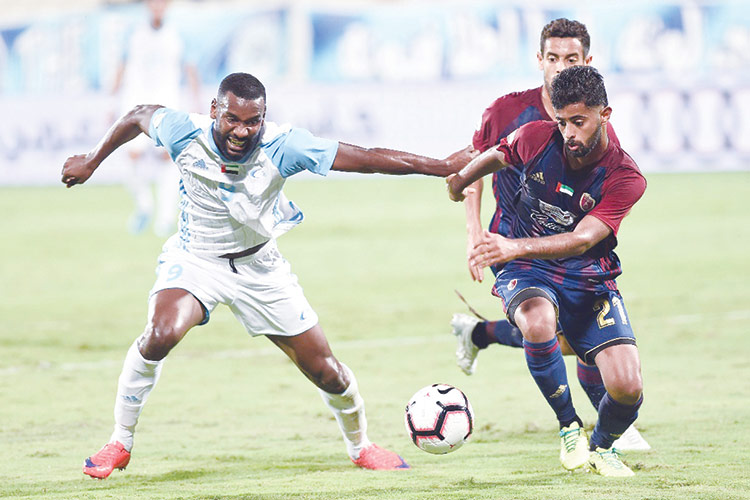 Action from the previous round match of the Arabian Gulf Cup between Al Wahda and Bani Yas.

abu dhabi : Al Wahda and Bani Yas lock horns in the semi-final clash of the Arabian Gulf Cup for a spot in the title showdown at the Al Nahyan Stadium on Friday.

Al Wahda will face a tough test against Bani Yas - the only team who they failed to beat in their seven cup games.

The winner is set to face Shabab Al Ahli, who reached the final after beating Al Nasr on penalties.

Most of the newly-promoted teams across all leagues have one main goal; stay up in the top-flight and avoid relegation.

Bani Yas, however, are one of the few teams that had a bigger target as they proved their ability to keep up with the big teams, positioning themselves as a high-performing team.

Since the early stages of the competition, they put on balanced performances and adopted a strategy in both the league and the cup that depended on compact and organised defense and counter-attacks.

The strategy adopted by Croatian coach Krunoslav Jurcic, who joined the newly-promoted team ahead of the new season, proved successful as they conceded only two goals in their first four games in the group stage.

The Sky Blues kicked off the group stage with a 1-1 draw with Ajman before beating Dibba 3-0 in the second game. They then defeated Ittihad Kalba 2-1 and played out a goalless draw with Al Wahda.

Bani Yas conceded only one defeat in the Arabian Gulf League when they fell to a 2-1 loss to Shabab Al Ahli in gameweek 6 to remain frozen on eight points ahead of the final matchweek.

They, however, played out a 1-1 draw with Al Wasl in the final mathcweek as both sides secured their spots in the quarter-final. The Sky Blues finished in third place on nine points, one above the Cheetahs in fourth place.

Bani Yas faced a tough challenge in the quarter-finals as they were pitted against Al Ain away from home. However, they pulled off a surprise and earned a 1-0 win, thanks to Haboush Saleh’s winner, to face Al Wahda in the semi-final.

Meanwhile, Al Wahda were able to seal a spot in the last four of the cup without conceding a defeat.

Al Wahda were drawn in Group A of the Arabian Gulf Cup along with Shabab Al Ahli, Bani Yas, Dibba, Ajman and Ittihad Kalba.

Al Wahda kicked off the group stage with a tough clash against Shabab Al Ahli, in which they emerged 1-0 victorious. They extended their winning run as they defeated Al Wasl 3-0, earned a 1-0 win over Ajman, and a 2-0 victory over Dibba to collect 12 points from the first four rounds and secure an early ticket to the quarter-final.

They were then held by Bani Yas to a goalless draw before they defeated Ittihad Kalba 2-0.

The Clarets finished as group winners with 16 points. They collected the most number of points in the two groups, one above Group B winners Al Nasr.

The Clarets netted a total of nine goals in the group stage, with an average of 1.5 goals per game. They also produced an impressive defensive performance as they kept a clean sheet in all six games.

Al Ain and Shabab Al Ahli are tied as the second-best defense after conceding four goals each.

For the quarter-final, they were pitted against Emirates Club who advanced after finishing fourth in Group B on eight points. The Clarets marched to an easy 5-0 win against the Falcons to reach the semi-final and maintain their clean sheet for the seventh cup game in a row.