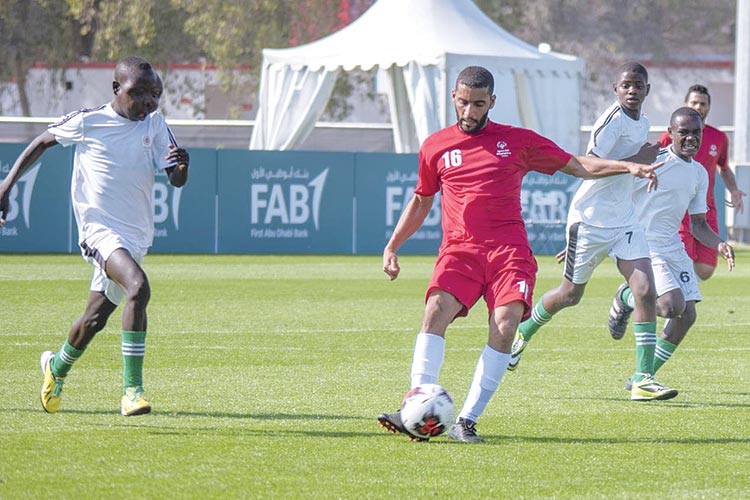 Oman and Rwanda players in action during their Special Olympics football match on Wednesday.

Abu Dhabi: Special Olympics World Games 2019 has made history by welcoming a record-breaking 200 nations ahead of the World Games. Of the 200 nations, 195 will compete in the Games and five will observe.

Held in the Middle East for the first time, 7,500 athletes will take part in 24 Olympic-style sports over seven days. With the highest number of women taking part and the largest number of Unified team mates on board, the World Games will capture the attention of the globe.

Under the patronage of His Highness Sheikh Mohamed Bin Zayed Al Nahyan, the Crown Prince of Abu Dhabi and Deputy Supreme Commander of the UAE’s Armed Forces, Special Olympics World Games Abu Dhabi 2019 is an integral part of local, national and regional plans to expand opportunities for people of determination in line with Abu Dhabi and the UAE’s shared vision of a unified and inclusive society.

Taking place from 14-21 March in the UAE Year of Tolerance, the largest sports and humanitarian event on the planet in 2019 will be a momentous display of inclusivity, unity, respect, and sporting achievement.

A catalyst for positive change, the World Games will welcome thousands of athletes to showcase their bravery, passion and skills as part of a global movement to create a brighter future for people of determination everywhere.  The most unified Games in the 50-year history of Special Olympics, the World Games Abu Dhabi involves people of determination (the UAE’s official terminology for people with disabilities) in every aspect of the event.

From appointing a group of individuals with disabilities known as ‘The Makers’ to be the creative driving force behind the Opening Ceremony performances, to rollout out new and innovative training programs for Special Olympics athletes to become Technical Officials, and employing more than a dozen people with determination, the Local Organizing Committee for the Games has ensured that the staging of the event is as unified as the message it hopes to convey to people across the globe.

More than 2,500 women will fly the flag for their nation, with almost half of them performing in athletics competitions. Saudi Arabia will send female athletes for the first time, with 14 women participating.

The host nation, the UAE, will filed its largest-ever squad of athletes at a World Games, with 320 sportsmen and women participating making it the biggest delegation at the event, closely followed by Special Olympics Bharat and Special Olympics USA.

The World Games in Abu Dhabi will also feature the largest volunteer program to date in the Middle East and North Africa. More than 20,000 people have registered to give their time to the event, demonstrating an unprecedented level of engagement with the principals of inclusion and strengthening the culture of volunteerism.

Nine world-class venues in Abu Dhabi and Dubai will accommodate 500,000 spectators, 1,500 officials will referee the Games, while 3,000 coaches will assist the athletes.

Competing in the 11-a-side competition at Zayed Sports City, Ali Al Anbouri was the star of the show after scoring five goals. Al Anbouri completed a hat-rick before half-time and added to his tally in the 51st and 58th minutes.

Khalid Al Alawi also found the target in the 13th minute while Mohammed Al Nabhini scored in the 43rd and 53rd minutes.

A total of 14 unified sides are playing in the World Games’ 11-a-side football competition, spread over four pools. Oman is in Group D alongside Austria and Rwanda.

The football competitions are taking place at Zayed Sports City, with the final due to take place on March 20.