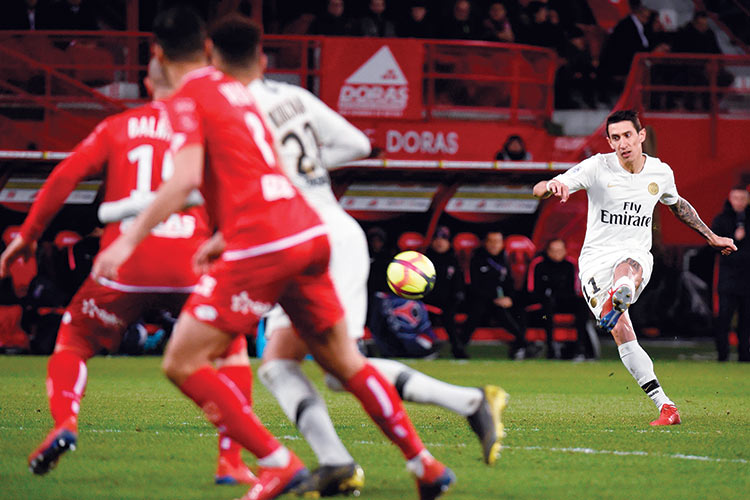 Paris: Paris Saint-Germain shook off their Champions League hangover and resumed their canter towards another French title on Tuesday as they cruised to a 4-0 win in Dijon.

Marquinhos, Kylian Mbappe, Angel Di Maria and Eric Maxim Choupo-Moting scored PSG’s goals in their first outing since their disastrous exit from the Champions League in the last 16 at the hands of Manchester United last week.

The result left Thomas Tuchel’s team 17 points clear of Lille in second place, and they still have a game in hand.

With a French Cup semi-final to come next month, a domestic double remains a possibility, but any celebrations here were low key for a club whose priority has long been Europe.

“It was a first step to show that we could react like champions. It was a good reaction,” said Tuchel.

“We still have objectives and we want to win the league and the Cup.”

The PSG squad had been given three days off in the wake of their 3-1 home reverse against United, which eliminated them from the Champions League on away goals, the third season running in which they have gone out in the last 16.

Their return to training on Sunday had been marked by tensions between players and unhappy supporters hurling abuse, and it remains to be seen what kind of welcome they receive when they play host to Marseille this weekend.

“I want our supporters to show that we are all together. That is the only thing to do,” said Tuchel.

“One VAR decision must not change that. The supporters are disappointed, like us, but now is the time to show we are together.”

Referring to the Champions League exit, and the nature of it, the German added: “We must accept that result was an accident. Stay calm and maintain our confidence in this team.”

A Dijon side battling to avoid relegation were the ideal opponents for PSG here, with the visitors going ahead inside seven minutes when Marquinhos headed home from a Di Maria corner.

Mbappe got the second shortly before half-time, bundling in a Layvin Kurzawa centre from close range for his 25th league goal of the campaign.