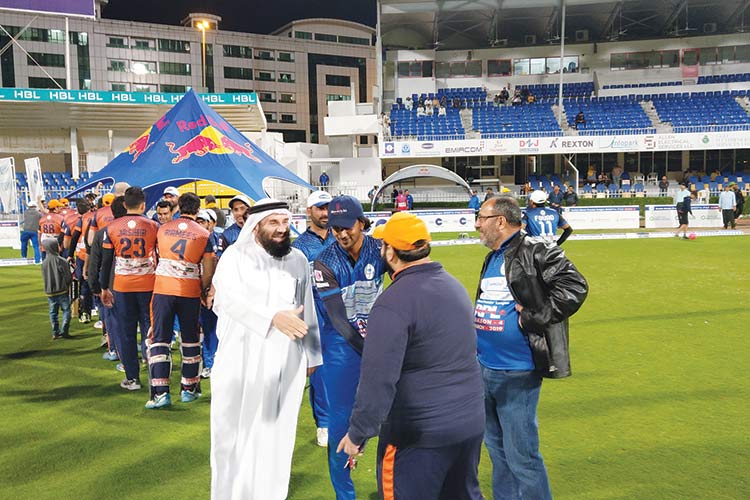 Orange SIB and Geco A players, along with the dignitaries, greet each other after the match.

Sharjah: Riding on the all-round performance of Adeel, SIB Orange snatched a thrilling six-wicket win from Geco A in a quarter-final match of the Rashid Alleem Premier League (RPL) on Tuesday.

Adeel accounted for the dismissals of two players and scored an unbeaten 39 as Orange reached the target of 128 off the last ball of the match.

Chasing a relatively easy target, Orange lost the first wicket with just 11 runs on board. But a 52-run stand between Jawad Abbasi and Nabil SIB took the score to 63 in 9 overs. After the dismissal of Nabil, Orange lost one more wicket with in a span of three runs to be reduced to 66-3.

But Adeel kept his cool and scored a watchful 39 off 34 delivers with the help of two boundaries to see his team home.

Earlier, batting first, Geco A got off to a faltering start, losing their first for eight runs only, when Kamran Rasool clean bowled Bharatt Jethhwa. Waqas Tariq and Karan Ashok tried to revive the innings with a 39-run partnership before the former was clean bowled by Moutasim Billah.

Adeel and Nabil ripped through the Geco A batting line-up. Nabil dismissed Atif Mehmoud, Muhammad Shahbaz and Muhammad Adeel Raza while Adeel got rid of Ashok and Ejaz Tanveer.

Geco A kept on losing the wickets at regular intervals and could manage to muster 127 in their allotted 20 overs.

In another match, Sewa defeated Scan Electromechanical by 47 runs to book a berth in the semi-finals.

Batting first, Sewa posted a competitive total of 141 for the loss eight wickets in their allotted 20 overs and bundled out Scan for 94.

Babar Ghanzanfar smashed a blitzkrieg 47-ball 57 with the help of three boundaries and two sixes.

For Sewa, Sayed Tousif and Khaliq took three and two wickets respectively to restrict Scan to 94 all out in 17.1 overs.