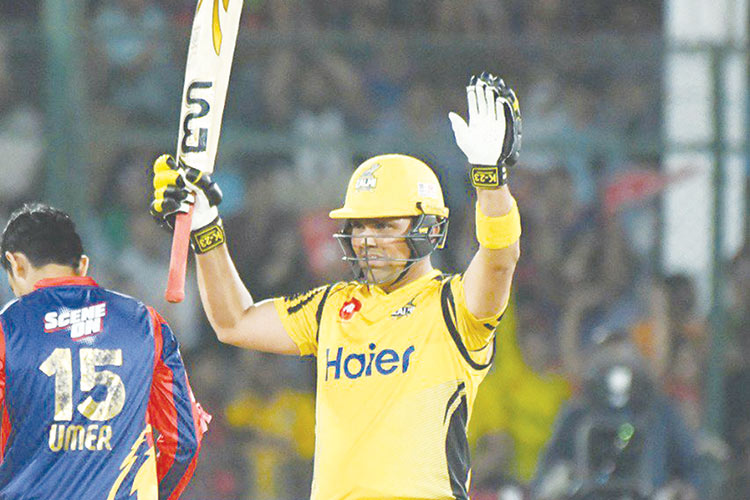 Peshawar Zalmi’s Kamran Akmal celebrates his fifty against Karachi Kings during their PSL match in Karachi on Monday. Supplied

Karachi: Peshawar Zalmi defeated Karachi Kings by 61 runs in the the 30th Twenty20 match of the Pakistan Super League (PSL) – 2019 played at the National Stadium, Karachi on Monday.

Peshawar Zalmi scored 203 runs for 7 after Karachi Kings won the toss and decided to field in the second match on the same day and the fourth successive match at Karachi.

This was also the last league match of PSL-4 after which all the six participating teams will complete their quota of ten matches each and then the event will go through the process of Eliminator 1 and 2, and Qualifier matches on the basis of the overall points and net run rate of the teams.

Karachi Kings were playing their second match (two in two days) before the home crowd of exciting fans, who witnessed last night how the hosts struggled to record a one-run sensational victory over Quetta Gladiators and qualified for the play-offs.

After that match, Karachi Kings moved up to third place on the table with ten points and a net run rate of -0.403 after winning five matches and losing four in their nine matches.

With this win, Peshawar Zalmi, go top with 14 points and an NRR of 0.83, jumping ahead of Quetta Gladiators who were on top of the table with 14 points before the last match.

Earlier, Mohammad Abbas and Shan Masood starred in their last game of the tournament as Lahore Qalandars finished last once again in the ongoing Pakistan Super League 2019.

After being asked to bat first, Qalandars lost their opener Rikki Wessels early when he was undone by drift from Chris Green.

Lahore’s middle order once again faltered as they kept on losing wickets at regular intervals. That denied them of the key partnerships crucial in setting up a decent total for their bowlers to defend.

Skipper Fakhar Zaman showed some resistance at the top with a 36-ball 53, consisting of eight fours and one maximum.

But he was dismissed in the 12th over when he sliced a googly from Afridi which was caught comfortably by Shan Masood at point.

Mohammad Abbas was the pick of the bowlers from Multan Sultans, ending up with figures of 3 for 22 from his quota of four overs.

David Wiese was the second highest run-scorer from Lahore’s innings, with a 22-ball 30 to get Lahore’s total to 140.

In reply, Multan lost Umar Siddiq early, as the left-handed opening batsman fell short of his ground with a direct hit from the opposition skipper, Fakhar Zaman.

James Vince and Shan Masood then constructed a 50-run partnership to give their side a chance before the former was caught at mid-on, trying to clear the in-field.

Masood (48 off 25) was caught off Wiese’s bowling but at that point, the game was almost over for Lahore as the opposition required only 18 more to win. Johnson Charles was another key figure to Multan’s win, with his 25-ball 41 adding more woes to Lahore Qalandars in their final game of the tournament.

Mohammad Abbas was declared player of the match for his solid bowling performance.